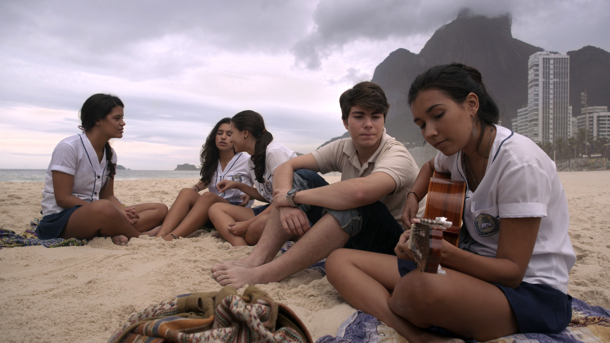 Fellipe Barbosa’s feature film debut is somewhere between late Buñuel and a Brazilian “Telenovela”. Family and servants living in the great villa the title refers to, will undergo a fundamental change during the detail-obsessed narrative, painting rich psychological portraits of downfalls and awakenings.

In Rio, we first see Hugo (Noaves), the patriarch, climbing out of the pool, surveying the mansion with a certain angst. His wife Sonia, a catholic from France, is the bearer of standards – mostly from the beginning of the last century. Their teenage children Jean (Cavalcanti) and Nathalie (Melo), try to hide their transgressions from the parents, particularly the randy Jean, who cosies up to the attractive maid Rita (Pinheiro) at night.

Gradually we learn the reason for Hugo’s anxiety: the family is bankrupt, and soon the driver Severino – a replacement father figure for Jean – has to go. When Sonia discovers pornographic photos of Rita in her son’s bedroom, she finds a good excuse to sack her too. And after the cook follows the exodus, Sonia has to start selling cosmetics to make ends meet. But these sacrifices are not enough: we see Hugo showing the villa to a potential buyer. Jean, left to his own devices, drops out of his high school exams at private school and starts looking for the servants in ‘favelas’: his real family.

The camera shows meticulously the objects in the family home, and the relationship the adults have with them. The same goes for the parents’ relationship with the servants: racial and class barriers are huge, even though Sonia pretends otherwise. The parents’ power lies in their status symbols (house and servants) and when Jean understands that both are gone, he is free from parental power, since love was never part of the bargain. Whilst the family interactions are convincing, Jean’s short relationship with Luiza, another student, who argues in favour of the new law for “University Quotas for students from public schools”,  is just a pandering to political correctness. Jean is only interested in members of a lower social class if there’s something in it for him.

Newcomer, Cavalcanti is brilliant in his raw performance of a permanently lustful teenager, he could easily be from a Truffaut film. Noaves’ Hugo is a fine portrait of a materialist, unable to function without house and servants, but too cowardly to accept his limitations, whilst Melo’s Sonia really belongs to the world of Buñuel/Visconti: unable to hide her transparent emotions when her husband puts his arm around her in bed, she viciously rubbishes his advances, hissing “can’t you see, I’m praying”. CASA GRANDE is a lively portrait of a society torn apart by race and class, a sort of South American “Götterdämmerung”. AS