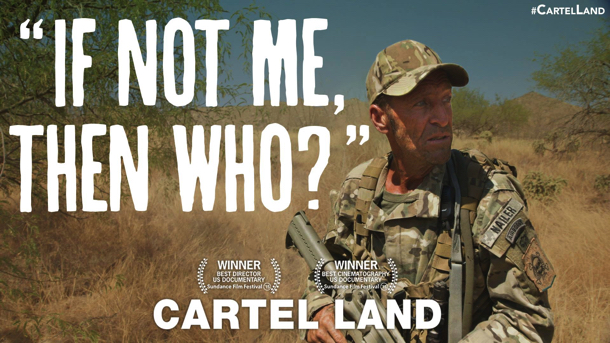 Matthew Heineman’s second feature documentary is certainly a change in topic from his health care documentary Escape Fire: CARTEL LAND is as violent as one can imagine, an ultra-violent video game come to live.

CARTEL LAND is actually two films in one: both parts feature violent men ready to go to war for their cause because they feel their respective governments do not care. On the Arizona side of the US/Mexican border we are introduced to Tim “Nailer” Foley, who lost his job in 2008 during the recession, and has blamed Mexican immigrants for taking his job. He has ended up at the border with his friends of the ‘Arizona Border Recon’, trying to stem the “flood” of emigrants, feeling very self-righteous and comparing himself and his men to David in a fight against Goliath, a fight they have to win for the good of the USA, since the government has little interest in the issue. Foley, a bitter racist, looks much older than his years, alcohol and other drug abuse have left their marks. He and his men are like vultures, spoiling for a kill, their white-supremacy ideology condoning the most vicious attacks – these men are as much outside legality as possible and only in the Southern states of the USA could they roam in freedom.

On the other side of the border, about 1500 miles away, we meet Dr. Jose Miguel Mireles Valverde, looking after his patients during the day, whilst leading the ‘Autodefensas’ of local people against the drug cartel of Knights Templars. On first sight, the difference between him and Foley could not be greater: the doctor seems a poster-boy for goodness, but we soon learn of a certain overlap between drug dealers and the defence league: torture seems to be common on both sides. Doctor Valverde, whilst not actually condoning this, uses the same arguments as Foley: the government does not care, we have to look after ourselves – perhaps understandable words, spoken at the funeral of fifteen victims of the Templar Knights, the youngest a few month old. Later, Valverde is nearly killed in a very suspicious looking plane crash: this all out war, and the “good’ guys will take no prisoners.

The overriding problem, as nearly always with organised violence of this kind, is poverty: at the beginning of the film, we see some meth ”cookers” in action. In the desert they brew their deadly concoctions, apologetic and contrite, they excuse their trade with the utter poverty they live. “If you would be in our position” is the question hanging in the air, “what would you do?”

CARTEL LAND is shocking, not least because of its violence (never glamourised), but because of the total loss of a moral compass, on all sides. The groups claim self-defence, merrily killing and torturing each other. Rightfully, Heineman does not even try to find answers. Cartel Land leaves the audience in a stupor – ‘la bête humaine’ in action. AS