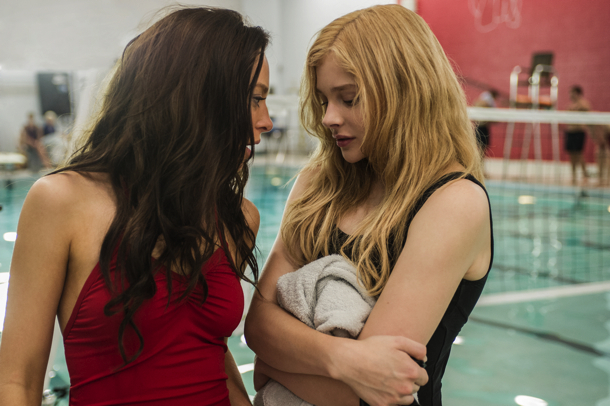 Sissy Spacek is synonymous with the 1976 horror classic CARRIE  just as Beatrice Dalle was with Betty Blue or Vivien Leigh with Gone With Wind, so ‘re-imagining’ Brian De Palma’s seminal horror outing was always going to be a challenge.  How could this classic story of a bullied, outsider possibly be improved upon?  Strangely, Kimberly Peirce’s CARRIE overhaul manages to be a well-paced and mildly appealing tragedy, as prom flicks go and a great improvement on the TV remake of Carrie that outstayed its welcome at a running time of well over two hours. 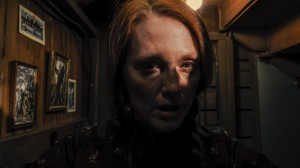 And it has a starry cast to help it along with Julianne Moore as mother  Margaret – a religious nutter if ever there was one – she excels in the role with her straggly hair, wild eyes and discretely quivering lips.  But Chloe Grace Moretz is cute and adorable rather than weird and tortured as Carrie, and never captures the frail erratic eerieness of Spacek’s Carrie.

For  a start, dressed as a prom-queen she’s a babe with pouty lips and a cute smile that even Dracula would fall in love with.  As an emotionally damaged child, she displays none of the angst that Sissy Spacek brought to the role.  Even in the hammed-up shower scene (one of the worst tributes to womanhood ever to be made apart from Powder Room), her performance feels fake rather than authentic (in a scene that really goes on far too long), but has the contempo feel of being recorded on an iPhone, to give it that fatal modern twist.

Peirce has used the same screenwriter as Brian De Palma: Lawrence D. Cohen, working with Roberto Aguirre-Sacasa in an attempt to bring respect to the outing, even re-hashing some of the original dialogue. Best know for her 1999 feature, BOYS DON’T CRY, Peirce’s remake is more faithful to De Palma’s film that it is to Stephen King’s novel, and there is also clearly a attempt to examine Carrie’s toxic relationship with her mother that was central to his original story.  But none of this is really dealt with in depth. There is no terror here only special effects, and heightened melodrama replaces the lyricism that existed in the original.   Another contemporary twist is the use of a middle class father to attempt to threaten the school with his legal expertise in support of his vile daughter Chris (Portia Doubleday) but this feels out of place and irrelevant to the drama.  Gabriella Wilde (Sue Snell) and Ansel Ansort (Tommy Ross) although competent in their roles seem like plastic characters as the teen lovers who try to save the day, piqued with guilt over their shabby treatment of Carrie and Ansel Ansort’s Tommy feels almost too much chemistry for Moretz’s Carrie at the prom. 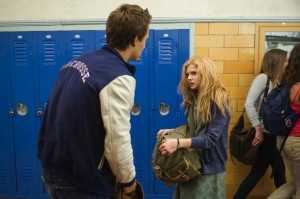 The only character to stand out with any real personality or human warmth is Judy Greer as the gym mistress.

And the Carrie here comes across as a thoroughly nice and well-adjusted teenager.  It’s only really when she discovers and develops her latent power of telekinesis that proceedings turn sinister.   But the tragedy of the prom night evokes only pity and then unbelievability with its final absurd meltdown. Up to this point, tragedy is the only emotion evoked. Never terror or even fear.

Special effects are confined to the apocalypsis, where we’re rooting for Carrie in her final hour of glory as she fights back with the lethal conviction that only a child from a broken, abused background can muster.  That said, Peirce goes into overgear as almost touching drama turns to manic melodrama as Carrie takes control.  If nothing else, let’s hope that this pale remake will resurrect interest in re-visiting the true cult classic that rocked our teenage collective consciousness in the hot summer of 1976.

CARRIE IS OUT on DVD/BLU