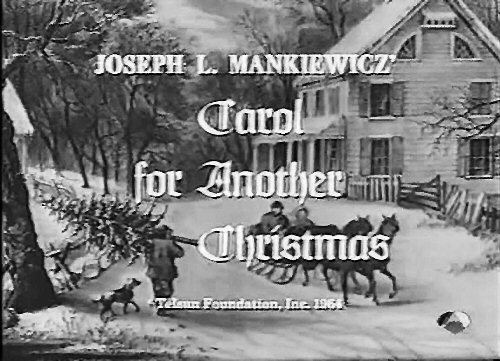 Carol for Another Christmas (1964) 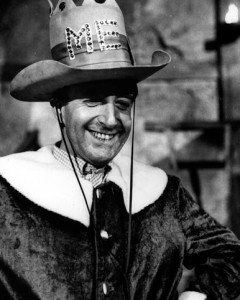 This ambitious pacifist reworking of ‘A Christmas Carol’ with echoes of H.G.Wells’s ‘Things to Come’, commissioned by the United Nations, is one of those creations more interesting for the fact of its existence than for what it actually achieves. The only TV production ever directed by Joseph Mankiewicz (who was still feeling ashamed at himself for making Cleopatra), it was written by Rod Serling, and resembles a feature length episode of ‘The Twilight Zone’ at its most earnest. As liberal America breathed a sigh of relief at having just dodged the bullet of a Goldwater presidency, it probably already felt dated the very evening it was transmitted without commercials on ABC on 28 December 1964, when it attracted a lively debate; followed by a silence that lasted nearly half a century. There was a one-off screening at the National Film Theatre on London’s South Bank in 1977, but for decades all that survived of CAROL FOR ANOTHER CHRISTMAS was its haunting theme by Henry Mancini. Not until 48 years later, on 16 December 2012, was it finally re-screened on TCM. A month ago it was posted on YouTube, so now we can all finally see it.

Made at a time when the world was still shaking from the twin traumas of the Cuban missile crisis and the assassination of President Kennedy, it ironically now seems in retrospect a relic from a gentler age, before Vietnam and Kent State. The elephant in the room of CAROL FOR ANOTHER CHRISTMAS was an escalating Asian ‘police action’ which had already swelled the number of US military personnel in Vietnam from several hundred to over 10,000 by the time the 25 January 1963 edition of LIFE magazine carried a cover article entitled ‘We Wade Deeper into Jungle War’. The obsession with The Bomb and the almost comforting abstraction of Mutually Assured Destruction displayed by DR STRANGELOVE and CAROL FOR ANOTHER CHRISTMAS would soon be replaced by the messier and more immediate shambles of the Vietnam War and the emergence of hippie culture which swiftly rendered CAROL FOR ANOTHER CHRISTMAS  irrelevant and unrepeatable.

Sterling Hayden (playing what was probably his final lead) is Daniel Grudge, who has never got over the death of his son Marley on Christmas Eve 1944 (seen in a portrait and fleetingly as a ghost played by an uncredited Peter Fonda) and has withdrawn from the outside world. Having shunned his young nephew Ben Gazzara’s pleadings to support world unity, Grudge is shortly afterwards spirited away to a WWI troopship loaded with coffins where the Ghost of Christmas Past introduces himself in the form of a loquacious American doughboy from 1918 (Steve Lawrence) who talks (and talks) like a hip 60’s peacenik. Like most of the characters, Christmas Past has made his point long before his lecture ends, and when criticising the world community for inaction in the face of Nazi expansionism whitewashes the role of Hitler’s then ally into a neutral bystander through the extraordinary claim that “Russia kept the phone off the hook while Poland was destroyed” (Katyn anyone?). The fact that the film’s concern is with atomic rather than conventional warfare is underlined by Drudge’s next visit (with Eva Marie Saint), back to Hiroshima in 1945; after which Pat Hingle as Christmas Present is shown stuffing his face while others go hungry. (Drudge’s distaste at his display of Western indifference to the hardship of others is more implicit than apparent in Hayden’s monotonous performance, as his expression changes little through this or what follows).

Christmas Future in the form of a bearded Robert Shaw then introduces Grudge to a post-Apocalyptic nightmare reminiscent of ‘Things to Come’, and presided over by Hayden’s DR STRANGELOVE co-star Peter Sellers. Making his first acting appearance since his near-fatal heart attack the previous spring, Sellers is visibly a changed man. Leaner and with a manic gleam in his eye (it is hard to tell whether it is simply acting or the result of his recent near-death experience), he makes the flesh crawl as a demagogue rejoicing in the name ‘Imperial Me’. He wears a pilgrim suit and ten gallon hat bearing the moniker ‘ME’, and as he expounds the New Order of self-centred pig ignorance and rouses his ragged followers in a frenzied chant of “ME! ME!! ME!!!”, the possibility occurs that after 52 years of obsolescence, maybe CAROL FOR ANOTHER CHRISTMAS‘s time has finally come. RICHARD CHATTEN

AVAILABLE TO BUY ON AMAZON.CO.UK OR VIEW ON YOUTUBE