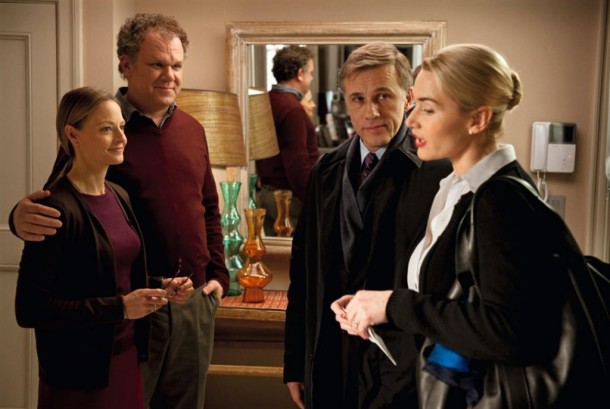 Director: Roman Polanski, co-writer Yasmina Reza from her play “The God of Carnage”

No other director has Roman Polanski’s uncanny power to disturb, move and excite.  And his latest film makes you uncomfortable and uneasy in a bad way.  Like eavesdropping on an argument between your friend and her mother. You want to smile politely and leave but you’re having lunch together so you cringe and stay.  And once a thing’s been said, it can’t be unsaid.  Ghastly, inescapable, unforgettable things that embarrass everyone involved.

The premise is simple: Two kids have had a run in during school break.  The parents, Kate Winslet and Christoph Waltz meet in Jody Foster and John C Reilly’s Manhatten apartment hoping for a reconciliation. Pleasantries are exchanged, espresso served,  but then the mood turns sour. Minor disagreements are smoothed over, so out comes the homemade cake but with a touch of strychnine?. Gradually the discussion breaks down into hostility.  An expensive vase of tulips ends up on the carpet.  What starts as a minor issue turns global.  Woman against man, wife against husband, banker against shopkeeper, class warfare and open social meltdown.  No holds barred.  Only Polanski can create this feeling of tension in a small space and make it feel dynamic and far-reaching.  Caustic wit and biting satire laced with a dark and sinister outcome.  There’s comedy here but certainly no manners.  See it but squirm in your seat. ©