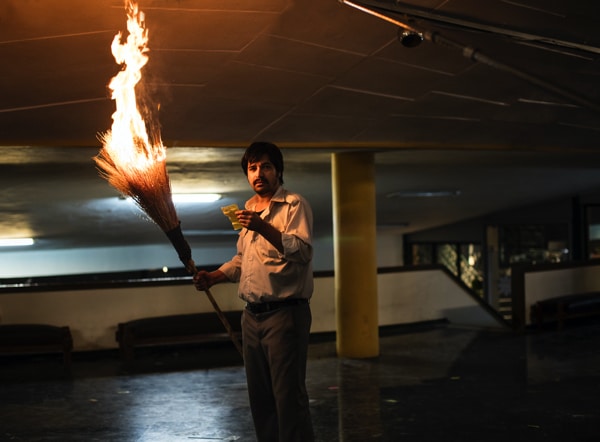 Iran’s Shahram Mokri won a Special Prize in the Venice Horizon Section in 2013 for Fish & Cat. His latest is another welcome surprise, Rivette-like in structure its repetitions coming together like a love letter to Cinema, connecting the past to the present, Mokri shows how history repeats itself. the McGuffins are all over the pace and the director works hard on his labyrinthine narrative, the past meeting the present in mirrors, the only reality being the film within the film.

In late August of 1979, six months before the Iranian Revolution, four men entered the Cinema Rex in Abadan (south-west Iran) and set fire to it with petrol. 478 People died whilst watching The Deer, directed by Masud Kimiai and starring the popular actor Behrouz Vosoughi, with the feature having a clear anti-Shah message. The arsonists had locked and removed the door handles to the only locked exits which opened inwardly so many people were crushed to death. Furthermore, the projection booth had been doused with petrol, and burst into flames. None of the cinema employees was present during the blaze. The fire engine arrived late, its water tank was empty. Only eight people managed to escape, among them one of the arsonists, Hossein Takbalizadh, who was later hanged. To make matters even more opaque, an interview in the Iranian News Update in August 2020 claimed the real arsonists now sit as MPs in the Iranian Parliament.

We meet Takbali (Kahani) who is desperately trying to get hold of his anti-anxiety medication, finally tracking down a man who might be able to provide the drugs. Ironically he works at the National Cinema Museum. Excerpts of The Crime of Carelessness, a 1912 silent movie by Harold M. Shaw, are interwoven into the narrative. Shaw had a big phobia about fire and his film centres on an arsonist.

Meanwhile Takbali meets his contact, a man in a costume, walking on stilts. He gives him the medicine, asking him to deliver a book to a friend. This leads Takbali to another cinema in the capital where The Deer is being shown, mainly to an audience of film students. Here Takbali meets Fallah (Dorani), Yadollah (Behraznia) and Faraj (Sareban), the modern day arsonists who he helps to douse the cinema in turpentine. But that doesn’t do the job, so Takbali buys gasoline to have another go later on.

DoP Alireza Barazandeh makes use of long tracking shots for his crowd scenes in the city, reserving a handheld camera for the countryside. If you’re looking for something different Careless Crime is highly recommended. AS