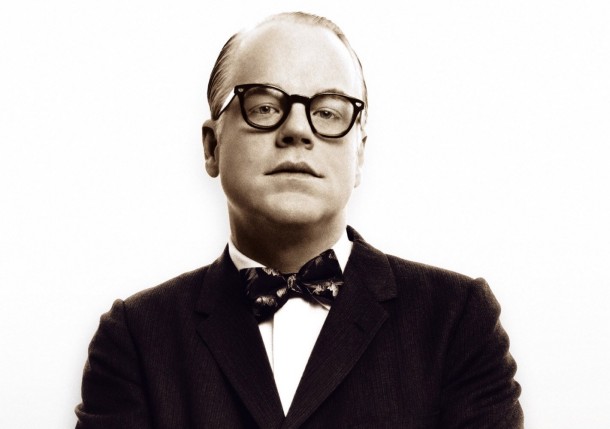 Before watching Capote, in the cinema, in 2005, I hadn’t read In Cold Blood. Afterwards I bought a copy and devoured it. The book stunned me as much as Bennet Miller’s stunning film. CAPOTE isn’t an adaptation of In Cold Blood (for that go to Richard Brooks 1967 film) but the story of how Truman Capote wrote his documentary fiction. Last night, viewing CAPOTE again, in a fine blu-ray transfer, I was still moved by its emotional power, sombre atmosphere and high intelligence.

In 1959 four members of the Cutter family were murdered on their Kansas farm. Truman Capote was gripped by the newspaper account and impelled to document the tragedy. Accompanying him was the writer Harper Lee (Catherine Keener) who acted as a facilitator between Capote and the detective on the case Alvin Dewey (Chris Cooper). Capote was gradually taken into the confidence of Perry Smith (Clifton Collins Jnr), one of the two killers.

Capote is a dark film about a writer’s motivations. It exposes Truman Capote’s contradictory pull to create a work of fiction that will inform, instruct, entertain and
gratify his egoistic and narcissistic impulses for notoriety and fame; whilst he ruthlessly manipulates the accused to achieve his deadline and finish the book. Capote, the man, fascinated (possibly with erotic undertones) by Perry Smith, also finds an empathy with his sad background. “When I think how good it (In Cold Blood) can be I can hardly breathe.” declares Truman Capote, played by Philip Seymour Hoffman. He gives a masterly performance, full of nuanced pain and joy that cunningly captures the mentality of a brilliantly gifted writer. Yet if there’s a sole flaw in Capote it’s a technical issue. Hoffman says his lines in a quiet, whispering, whiny manner. This is authentically Truman Capote but sometimes difficult to hear in the film’s sound mixing.

Capote has unforgettable moments. Especially the scene where an impatient Truman wants Perry to tell him what really happened during the killings. Both actors modulate their acting – one listens and the other talks. Perry conveys a chilling detachment. And Truman, both excited and repelled, becomes a witness to a heart of darkness. The tone of this remarkable sequence, with its brooding low key lighting and judicious cutting back to the crime, has a severity that evokes the style of Robert Bresson. In substance, the film hints at the kind of malevolence you’ll find in Laughton’s Night of the Hunter or Thompson’s Cape Fear.

Capote probes and disturbs with equal measure. Not just because of its superb performances, but the restrained direction of Bennet Miller, a brilliant screenplay by Dan Futterman and the beautiful, often pastoral, photography of Adam Kimmel.
The film Infamous was released in 2006 and dealt with the same story. Although Infamous was more dramatically balanced between the two killers, it took fictional liberties with the story that were unconvincing. CAPOTE is for me the superior portrait of this fascinating writer and is already high up on my list as one of the great American films of the early 2000’s. ALAN PRICE