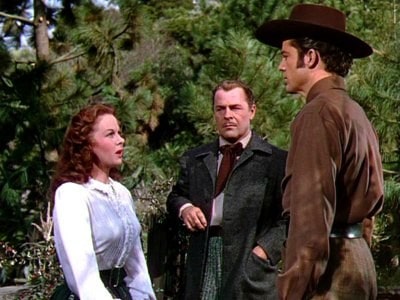 Jacques Tourneur’s first film in Technicolor won praise from Martin Scorsese for its use of colour. Set in Oregon in 1856, the obvious studio sets contrast badly with the majestic location work; but are mitigated by Tourneur’s Germanic lighting, mise en scene and elegantly mobile camera.

In the lead Dana Andrews is (constantly) addressed as and referred to just as ‘Logan’ (his full name is actually ‘Logan Stuart’). Most of the interesting supporting cast are given little to do, with the notable exception of Ward Bond as a particularly brutish heavy, and Hoagy Carmichael dressed as Mr Macawber, who gets to drawl ‘Ole’ Buttermilk Sky’. Richard Chatten