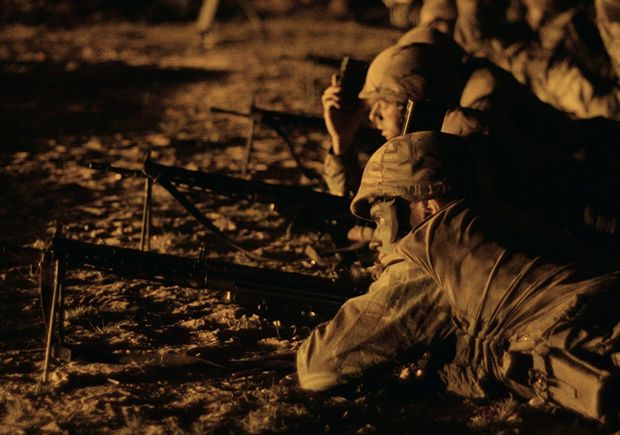 At first a vast expanse of verdant pasture seems a bucolic paradise buzzing with bees, grazing sheep and deer. But appearances can be deceptive. Only a handful of people live here under strictly controlled conditions – for reasons that soon become obvious. At first Bees go on making honey and the lambing season also seems oblivious to the combative nature surrounding them. This is Alcochete, home to Europe’s largest military base, on the outskirts of Lisbon.

Clearly this place is not the rural idyll it appears to be. Quite to the contrary. Soldiers are  preparing for active combat:Bombs explode, shots ring out across the fields, and troops undergo mock incursions, often with fake blood. And their impact on the local environment gradually starts to take hold. Bees are dying, not in their hives, but because they cannot get back to them. Something in the atmosphere is adversely affecting their ability to navigate. Ironically, scientists have finding a way to create man-made bees who are capable of joining the war effort, and being used in combat missions. At the same time, a sheep is found dying, unable to give birth to her stillborn lamb. This is also seems counterintuitive to what nature originally intended when the gods looks down from the starry obsidian skies and created humanity in all its entirety.

Bringing his architectural sense of framing, lighting and visual awareness,  Hespanha directs a documentary feature with thematic concerns that feel atavistic yet totally contemporary in exploring the origins of the word ‘campo’. Often abstract and abstruse, Campo is nevertheless a spell-binding and often mundane film that contemplates the transcendental wonder of the universe and nature while also considering the baseness of man’s inhumanity towards his fellow man. Etymologically speaking ‘Campo’ is both a simple field (in Italian) and a perilous battlefield: the Campus Martius was an area of Rome dedicated to Mars, the God of War, who was parodoxically also the patron of agriculture. So this natural breeding ground where flora and fauna innocently thrive and procreate is also a place of warfare and death. MT