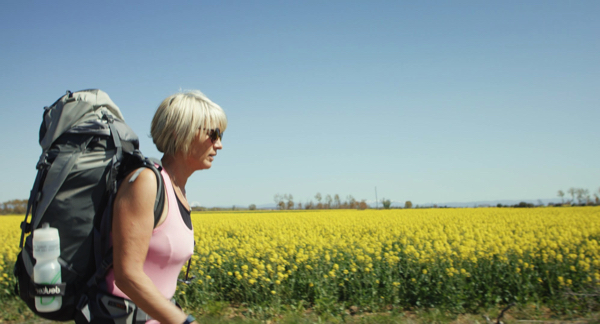 Antipodian first time documentary filmmakers Noel Smyth and Fergus Grady set off with six of their countrymen and women for a 800 km pilgrimage from Saint Jean Pied de Port, France to Santiago de Compostela in Spain. The holy walk started in the Middle Ages, and for the last sixty years, 300 000 yearly tried to come to terms with God, after their lives took a change for the worse, by undertaking this mammoth hike.

Sue Morris is first up, seventy, the oldest of the half dozen. She is suffering from degenerative arthritis. It is short of a miracle that she manages to stay the course, only once taking a bus and a taxi ride. But her stoic appearance hides a deeply traumatised inner life – and the journey seems not to have given her any answers.

It is much more straightforward for Terry and his son-in-law Mark Thompson – the former wearing a vest, claiming the 1.6 million steps are for Maddie, the daughter of Mark, who died from complications of Cystic Fibrosis at the age of seventeen. While not wishing to grade suffering,  Julie Zarifeh (54), seems to be hardest hit: in less than a month she lost her husband and son – basically her life. This certainly a Via Dolorosa for her, and her grief is utterly compelling.

The participants seem not to be overly religious, it is more the self torture which appeals to them, most of them suffering from survivor guilt. One listens to ‘Black Sabbath’, without the directors mentioning it. Dogs, horses, donkeys, beetles, lizards and snails are being cuddled and stared at, much to their alarm. The participants visit hairdressers and bars, the women sometimes dancing together, the men more interested in drinking. Small stones on the paths play a major role: Julie re-arranges them into a heart form: ‘For Paul and Sam’. The arrival in Santiago de Compostela lacks any triumph – a rather sobering ending. For Julie, the journey goes on to Muxia, on the Coast of Death, near the ocean. There she climbs the rocks and empties the content of an urn into the waves.

Even at eighty minutes, Camino Skies overstays its welcome. There is only so much to watch, and the repetitiousness of muddy pathways and ordinary day-to-day activities detract from the real physical and emotional suffering of these modern pilgrims. Yet despite the potential offered by the dramatic locations Smyth’s images are often too bland to be cinematically engaging, the filmmakers’ lack of inexperience diminishing the overall impact of these traumatised souls on their journey to salvation. AS

ON CURZON HOME CINEMA FROM 8 MAY 2020 | other platforms TBC