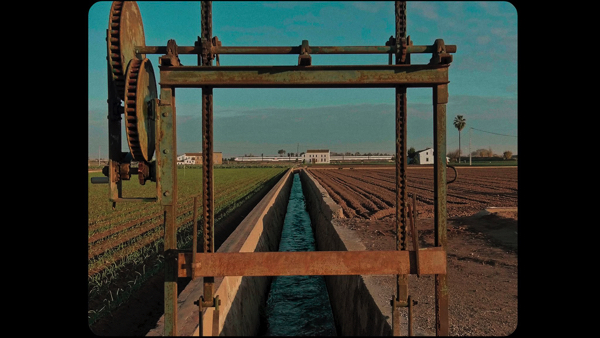 If you’ve ever enjoyed the Spanish milkshake “horchata de chufas” this is a simple story well told. By the end we know everything there is to know about the tiger nut.

Spanish filmmaker Alfonso Amador’s lush cinematic tribute to the humble ‘chufa’ glows with local colour – as much a piece of social, political and agricultural history as it is a pictorial guide to how the crop is grown, nurtured and finally turned into a Vitamin E rich snack or foodstuff in the village of Alboraya in the fertile region of “La Huerta (the orchard) near Valencia. Originally a small farming community, the region has expanded in recent years with the Valencia’s development as a metropolitan city. La Huerta was originally cultivated with irrigation canals at the time of Spain’s Moorish invasion, and its fertile soil later provided food for the Roman armies who occupied Iberia. Nowadays this fertile plain is divided into three areas bordered by the Mediterranean Sea.

The film, co-scripted with Sergi Dies, follows the tiger nut growers, particularly Antonio and Inma Ramon, as they work their way through the farming year starting with Winter (Inverno) and ending with Autumn (Tardor). Elegantly captured on the widescreen and in vibrant personal close-ups, most of footage is silent but occasionally a pithy dialogue breaks through in Valencian dialect, very close to Catalan: to discuss lunch (sometimes a lavish get together, or simply a sandwich and swig of local wine) or past methods of growing or – on a broader canvas – the reasons why and how the world has impacted on this small but indomitable farming corner of North Eastern Spain, that continues to produce fine vegetables – particularly artichokes and potatoes – thanks to its rich soil, fine weather and near maritime climate. The tiger nut crop is alternated with onions.

One elderly farmer has been involved in tiger nut farming all his life – since the age of 8 – and shows us his trusty equipment that includes a dung basket and hundred-year old shovel. But women take part in the growing too. Another farmer who works land tirelessly with this wife, explains his life’s work to his grandson: “La Huerta catches you, and there’s nothing more beautiful, because you live the land, you live life”. Tiger nut farming even has its own vocabulary: “Sao” refers to the ideal state of soil humidity for planting. The definition of plowing is “the art of unravelling the earth”.

Sadly, as a result of mass globalisation the farmers are struggling to survive because all the added value there was when the goods used to be sold at market has now dissipated. The large corporations have taken over and stock pile the tiger nuts, choking prices, and thus taking the profit margins. Migrant workers are useful but don’t have the same inherent sensitivity towards crop cultivation and handling as the locals. There is also talk amongst the locals of the land being sold to build a large commercial shopping centre – the idea being of creating more jobs. Pressure groups are encouraging locals to gather together and protest against this commercialisation but sadly time marches on. Camagroga is a sombre but dignified portrait of a struggling community: as the old generation dies out, a new one emerges keen to till the soil of their ancestors, and continue their heritage with the slogan: “Land for those who work on it”. MT