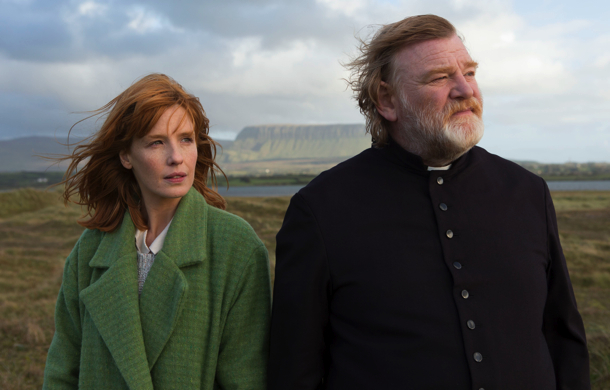 John Michael McDonagh’s perfectly-pitched follow-up to THE GUARD (2011) has another tour de force from Brendan Gleeson as a contemporary country pastor, Father James. Despite flashes of gentle humour, this story is darker and more contemplative as it combines elements of recent child abuse scandals and the current malaise with The Church in general and particularly its inability to connect with the local community.

Father James parish has an entourage of disenfranchised Irish lambs (Aidan Gillen, Chris O’Dowd, Kelly Reilly, Dylan Moran) and one of them, a victim of sexual abuse, hands him a death sentence over confession one day, giving him seven days to put his life in order before ‘paying for the sins of the father’ with his own life.

Although we’re not au fait with his murderer’s identity, Father James is, but takes a sanguine approach to matters continuing to support his local community and his messed-up daughter, a well-cast Kelly O’Reilly, on a visit from London. This is a drama to savour, along with its magnificent setting that create a wonderful sense of place in the small Sligo village in the Emerald Isles. McDonaugh’s well-written script is full or subtlety and wise insight. Immersive and unpredictable, the narrative goes down familiar pathways, often taking the road less-travelled and delivering some welcome surprises and some engaging vignettes (particularly from Dylan Moran, as a wealthy local landowner).

Brendan Gleeson is a joy to watch and his performance is one of integrity and gentleness, befitting a true man of the cloth. Seven days later the end comes unexpectedly but somehow predictably, but that only adds to the poignance of the piece and the strong message that it puts across. MT