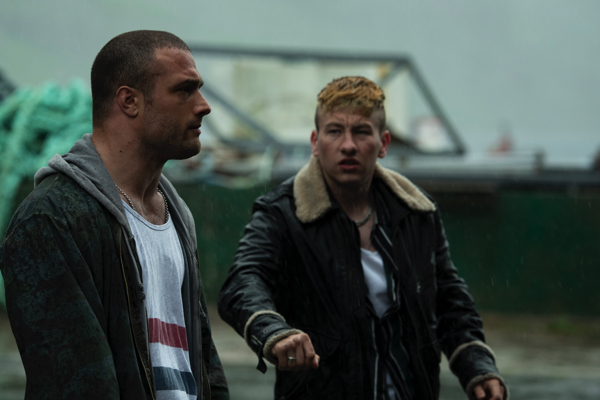 This ultra violent Irish crime thriller is a tale of love lost and vehement revenge that starts well but shoots itself in the foot slightly with a smaltzy ending. The wafer thin plot is a lowkey version of Mean Streets bulked out by shed-loads of atmosphere and a seething central performance by Cosmo Jarvis as an addled ex-boxer stuck between raising his son and serving as a mob enforcer for the dreaded Devers family. The drug-dealing Devers are a fearful bunch of thugs and interpersonal skills are parlous.

Calm with Horses is Nick Rowland’s feature debut adapted by Joe Murtagh from a selection of stories by Irish author Colin Barrett. The terrific Irish cast are what makes this so compelling: all seasoned pros you wouldn’t want to meet on a dark night, or even a sunny day, for that matter. Douglas Armstrong (Jarvis) is a dim-witted explosive henchman for drug-runner Dymphna (a nose-picking Keoghan) and his family, headed by the monstrous Paudi (veteran Ned Dennehy), for whom loyalty is the watchword. ‘Arm’ also has an autistic son from his ex Ursula (Niamh Algar) who wants him to help finance the boy’s education. They’re a heavy-drinking, snooker-playing mob who speed around this remote rural backwater of Ireland. It’s the sort of  downtrodden place where an abandoned settee is left rotting in the High Street.

The title refers to a nearby horse-training farm where Ursula’s boyfriend Rob (Welsh) is teaching the boy to ride, but Calm With Horses works best in the scenes involving the Devers family and their sculduggery. Efforts to make this into a love story revolving around Arm and Ursula fall flat, that’s for another film, and thus the final misjudged scene takes the sting out the thriller’s tail. Rowland sets up a superb showcase showdown in a country house deep in the wilds, but then spoils it all by turning it into a sob story. But for those who like a happy ending of sorts this is an impressive start to a promising career. MT