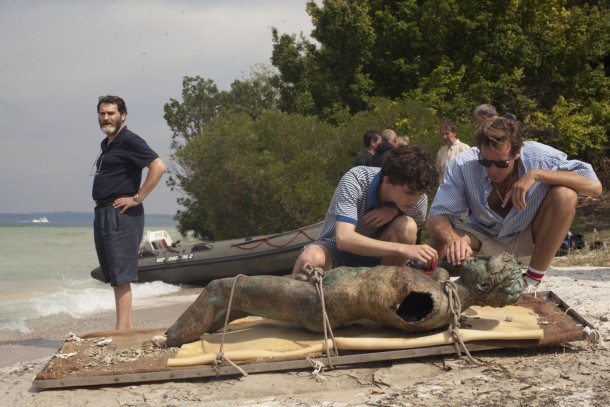 Directed by Luca Guadagnino and based on André Aciman’s 2007 novel of the same name, CALL ME BY YOUR NAME has similar stylishly languorous credentials to its forerunner, I Am Love, as it ravishingly unfurls.

In 1980s Cremona, where the summers are blindingly hot and torpid during the August holidays, one English family make their yearly vacation. Elio Perlman (Timothée Chalamet) is the musically gifted and sexually naive teenage son of Jewish parents, an eminent Classics professor (Michael Stuhlbarg) and his wife, who are accustomed to a philanthropic gesture of inviting another Jewish student to stay at their villa to help with research. This year’s intern is Armie Hammer’s rather too sexy and urbane Oliver, who looks more like one of the Greek statues Elio is wont to study, than a budding historian. Elio is smitten in discrete ecstasy as he descends into emotional meltdown. Guadagnino conjures up the heady world of la Dolce Vita that mingles with the sexual undertow and uneasiness of Body Heat and the elegance of a James Ivory classic (he co-wrote the script). And it all looks stunning.

Elio and Oliver grow closer as the Ferragosto shutdown approaches, swimming, sunbathing and sampling the locale ‘by night’; Elio gawping at Hammer’s pecs – as we do too. In return, Hammer treats him with thinly-veiled disdain, coming and going at will and flirting outrageously while rocking a massive Star of David on his tanned and tousled chest. While he is every so slightly brash, the Perlmans are discretion itself, as Elio’s father gracefully points out. Elio doesn’t know where to put himself as his burgeoning sensuality is challenged by his ‘bon chic bon genre’ credentials, he teeters like a Tom cat on a hot tin roof, wanting to howl at the moon, bewitched and bewildered.

When he meets Esther Garell’s girl next door, he is flummoxed by her gamine charm and distracted by his burning desire for someone who is clearly not available, fluffing his own chance at enjoably losing his own virginity in the process. His father misjudges the sexual ambiance -or does he?- coming up with one of the best son/father soliloquies of recent years where he outlines emotional intelligence for his son’s benefit. This is something every teenager should hear.  CALL ME BY YOUR NAME is a thoroughly enjoyable, slow-burning romantic drama which should be savoured more than once. It has so much more to offer than its awkward title belies, and merits its generous running time. MT