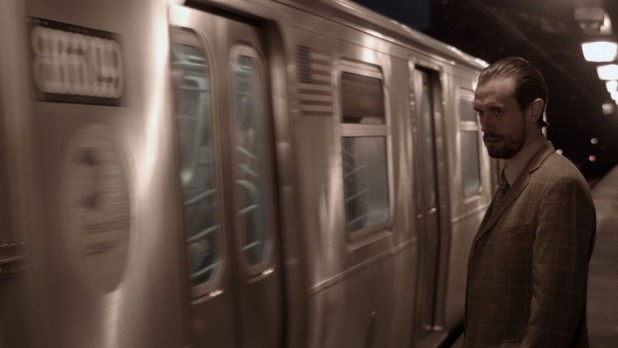 Slick and slightly sepia-tinted, CALLBACK stealthily follows Larry de Cecco (a sardonic Martin Bacigalupo) as he goes about his business playing bit roles for adverts that deal with the ennui of city life and keeping up with the American Dream (‘Drink megaboost, and you’ll be fine). At first Larry seems to rub along with this rather humdrum existence, at least that how it all appears. He clearly doesn’t have the chops to grab the headlines performance-wise, so he works in removals as a sideline, and often helps himself to things belonging to the people he moves, to the irritation of his weary boss (Larry Fessenden). By night, Larry is a peeping Tom to his latest tenant Alexandra (Lilli Stein) who also has aspirations to act, and amongst his other behavioural issues, he has a tendency for temper tantrums for which he attends the sessions of of a local religious pastor, purporting to be a ‘born again’ Christian..

But there’s something unpleasantly creepy about Larry who would certainly freak you out if you spent time with him at home. And flatmate Alexandra (Lilli Stein) is clearly either naive or far too polite to make anything of the way Larry talks in American clichés: ‘here’s some fresh towels’; ‘I’m a very driven person” and ‘thank you for sharing this with me’ or the way he plays Tchaikovsky classics at full volumn his car (is there a US equivalent to classic fm?). Musical choices add bathos to this delicious drama with Jimmy Fontana’s sixties love song “Il Mondo,” suggesting that Larry’s schizoid personality is fully conversant with a romantic life that he is unable to fulfil.

And soon enough Alexandra gains confidence in the de Cecco household, eventually falling foul of Larry’s romantic sensibilities over dinner one night. The result is shockingly grim. But Bacigalupo is simply dynamite in his creation of Larry (his voice even sounds like Vincent Price at one point) which dovetails  with Lilli Stein’s foxy turn as Alexandra, making this compact and understated psycho thriller eventually worth its weight in gold. MT