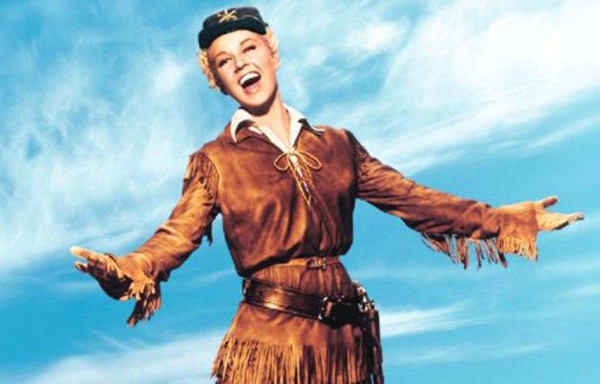 Director David Butler (1894-1974) was a major Hollywood filmmaker who brought successful family entertainment to the silver screen during the 30’s, 40’s and ’50s with cult classics such as Bright Eyes, Leave it to Beaver and Road to Morocco. In the ’60s he moved on to major TV work with series Twilight and 77. Sunset Strip, adding 90 directing credits to his name.

In Deadwood City, deep in the frontier territory of Dakota, men rule supreme. So it’s hardly surprising that the gun-toting, whip-cracking Calamity Jane (Day) tries to garner attention from her male counterparts – with mixed success. She saves the life of Lieutenant Danny Gilmartin (with whom she is secretly in love), liberating him from the Sioux and claiming “I understand why the Indians don’t want to give up this mountain country, it is so beautiful”. But the men of Deadwood want a real woman with feminine qualities and after travelling to Chicago to find such a ‘dame’ in celebrity singer Adelaid Adams, Jane mistakenly brings back the artist’s dresser, who promptly snatches Danny from under her nose.

There are cringeworthy moments galore in this comedy musical, particularly when Katie re-styles Jane’s home while the duo sing “A Woman’s Touch”. The ebullient Day overcomes most of this with her spirited and rambunctious performance, based on the real life character of Martha Jane Canary, a ‘scout’ who lived in the second half of the 19th century. The glorious technicolor images are a feast for the eyes – shame about the rather obvious back-projections. Writer James O’Hanlon can rightly claim he is the father of the central scene in John Ford’s Who Shot Liberty Valance (where John Wayne shoots the villain for John Stewart), in exactly the same way that Howard Keel shoots Jane’s glass out of her hand. The sing-along version is a great opportunity for audiences to join in with Doris Day’s gutsy heroine.