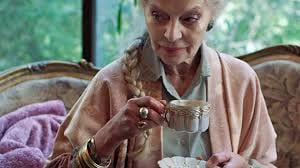 The Greek Weird Wave is alive again and kicking with this bizarre eco-drama the title of which relates to a potentially fatal parasitic disease affecting humans and dogs.

The illness captured the imagination of first time filmmaker Janis Rafa whose debut feature sees animals and humans living together in virtual squalor in a timeless, nameless post-apocalyptic place somewhere in Europe.

Kala azar is a strange and for the most part disgusting film to watch. And Rafa really rubs it in, quite literally. There are scenes where ointments are massaged into animals’ open sores. If you enjoy watching people pick their nails and teeth – then this is for you. It is the disgusting side of sensuous and makes a virtue out of its squalid dirtiness – the yuck factor prevailing throughout.

Rafa plays fast and loose with a narrative largely preoccupied with putting people on the same level as animals in a world focused on extreme animal-lovers – not just those who adore their pets and want the best for them, but people who want to get down and dirty with them too.


The film follows a couple of hippies (Tslilka and Lalos) who dedicate their lives to looking after a motley brood of mutts and pit-bulls. They also offer animal funerals with individual cremations thrown in. The pair are obsessed with collecting roadkill and picking and preening their own bodies while preparing food for their personal consummation – we see them peeling eggs and grapes without ever washing their hands, any sense of cleanliness or decorum is not the order of the day, and this makes for a stomach-churning watch.


At one point the main female protagonist (Penelope Tsilika) eats an apple while rummaging through a skip full of dead animals, weirdly placing segments of the fruit in amongst the furry corpses. Ringed fingers continually rummage through jars as they fish around in the gooey contents. The couple are also seen making love with bestial urgency, cleaning their dogs’ teeth by hand rather than using a brush, and generally compromising their own hygiene at the expense of the beasts.

This gruesomeness is interleaved with touching vignettes where the couple visits those recently bereaved of their pets – budgies, fish and cats.

Constantly on the move, the lead pair recover animal corpses from the highway and assist mourners in their pet funeral arrangements ensuring a sensitive ending for their faithful companions. Even caged birds and fish, who have lived a life of containment where they’ve never been touched by their owners, seem devastated at their demise. One woman requests a cremation for her fish, reduced to bones, and wrapped carefully in a silk napkin.

For the most part dialogue-free, the film is accompanied by the ambient sounds of animals licking, clawing, howling and scuffling. There are moving and inspired moments such as the scene where an orchestra of trumpets plays an eulogy to hens and chickens before they are taken away for slaughter. When we consider that these animals endure the worst conditions in factory farming, suffering terribly when they are killed (they are left to bleed to death in halal slaughter methods) this somehow feels appropriate.

DoP Thodoros Mihopoulos hangs around at dog’s eye level, focusing on mid section shots and occasionally panning out to take in the blustery windswept landscapes of the rural locations. This is not a film to be savoured – Kala Azar explores not only loss but our increasing attachment to the animal kingdom. We now live in an anthropocentric world where our pets are elevated to human level, as important as friends and family members, and sometimes more so.


Rafa comes from a background of art-based projects relating to the celebration of mourning and bereavement in all its different forms and has captured the zeitgeist of our growing obsession with animals being an essential part of our domestic lives. But it cuts both ways: recent surveys indicate that pets are increasingly feeling stressed out by our own anxiety levels as we rely on them for support in these angst-ridden times. They can’t take it, as it runs contrary to pack mentality (rather like parents continually relying on their small children for emotional support). An odd but prescient film which may not be pleasant to watch but certainly makes a valid point. MT