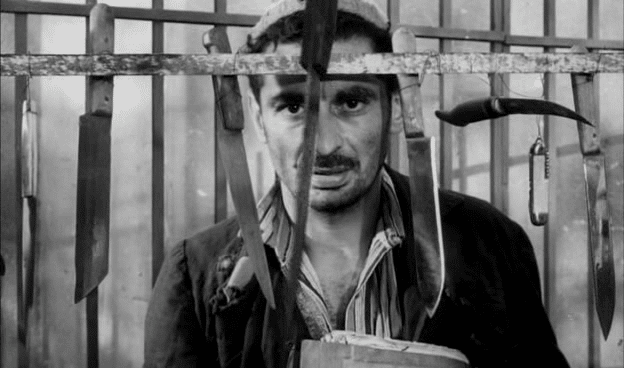 Cairo Station was the eleventh of over thirty feature films by prolific Egyptian filmmaker Youssef Chahine (1926-2008) providing a snapshot of Egyptian society that appears, on the face of it more, permissive than today.

Chahine was born into a multi-lingual family of Coptic Christians in British-occupied Alexandria where his lawyer father was a supporter of the Wafd nationalist party; his Greek mother sent him to the Christian English-speaking Victoria College. His desire for a theatrical career was first prompted in childhood by seeing shadow plays, then 9.5mm films.

Chahine rose to the international stage with his autobiographical trilogy set in the bustling Mediterranean port of Alexandria, the place of his birth and a creative melting pot where the Egyptian film industry was born in the 1920s: Iskindiria … Leh? (Alexandria … Why?, 1978); Haddouta Misriyya (An Egyptian Story, 1982); and Eskandarai Kaman We Kaman (Alexandria Again and Forever, 1989). But although he was highly regarded by European directors his films were rarely shown beyond the festival circuit in the West, apart from in France where he won a Palme d’Or for his oeuvre in 1997. Cairo Station was Chahine first auteur feature: far ahead of his time aesthetically and contents wise and now getting a international showing on Netflix.

Radical and very much ahead of its time – when you consider the step back that the Arab world has since taken – Cairo Station was later banned and Chahine forced to leave Egypt.

The station is seen as a microcosm of Egyptian society in the late 1950s. The country had undergone drastic changes: In 1956 Gamer Abdel Nasser had overthrown the monarchy and nationalised the Suez Canal. Everything was being questioned, particularly the role of women and the status quo between employers and workers. Despite the ebullient liveliness of some of the scenes, there’s a sinister thread of misogyny running through this psycho-sexual melodrama, Chahine was not for nothing an ardent admirer of Alfred Hitchcock, and DoP Alvise Orfanelli mirrors his use of light and shadow both on the widescreen images of the station and in intimate close-ups that convey the lust, fear and longing in the characters’ eyes. Considered Neo-realist by some critics, the element of male sexual obsession belongs very much to the early 1970s films of Brian de Palma, another Hitchcock disciple.

Told by the elderly narrator Madbouli (Al Barudi), a newspaper seller at the station, the narrative focus is his club-footed employee Quinawi (also played by Chahine) who lives in a porn-decked hovel where he drools over photos of semi-clad females dreaming of the flirtatious drinks seller Hanuma (Rostom). Quinawi is besotted by Hanuma, who sometimes plays him along if it suits her, although she is really in love with station porter and trade unionist Abu Serih (Sawqi), who is active in cutting out the middlemen, who take much of their earnings, giving the film its political angle.

One day Quinawi reads in the papers that a serial killer is on the loose. And while Abu Serih is busy with his union business, Hanuma plays a wicked game with Quinawi: toying with his offer of marriage and taking him up on his idea of going back to his village, where they will marry and raise a family. When Quinawi finds out he has been duped, he strikes out in the same style as the serial killer, blinded by rage and anger, making a fatal error that leads to the shocking finale where he emerges a tragic and pitiful victim.

There are two impressive highlights: the first is a Be-Bop interlude with “Mike and the Skyrockets”, performing in a train, Hanuma dancing along with gusto. The other one shows Quinawi taking revenge for his frustration on a little kitten. There is nothing muted or tender about the film’s characters who are seen in all the cruelty and splendour of the Middle East. AS