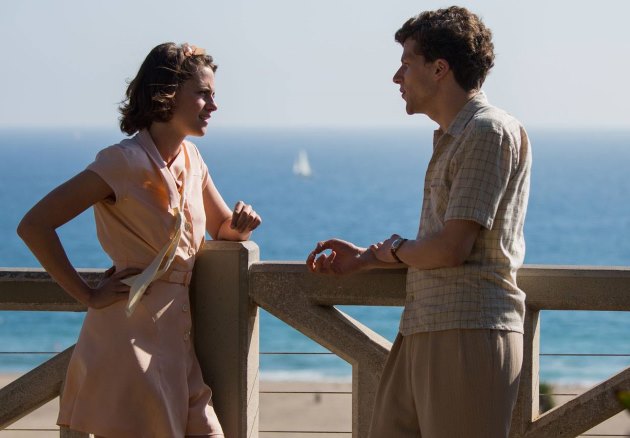 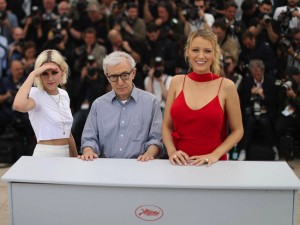 CAFE SOCIETY satirises showbiz and gangsterland America during the 1930s, all wrapped up in a bittersweet romantic love story for a young New Yorker seeking his fortune in Hollywood.

The tone is upbeat and the musical choices spot on as Woody Allen’s latest film opens the 69th Cannes Film Festival with a clever cocktail of razzmatazz and auteur-driven artistry. Sunlit and softly-focused, CAFE SOCIETY blends the hilarious humour of Small Time Crooks, the gorgeous sunsets of Manhattan, the wittiness of Annie Hall and romantic tenderness Husbands and Wives and whizzes it all into a 5-star cocktail where Jesse Eisenberg and Kristen Stewart spark like dynamite as young lovers Vonnie and Bobby who meet when the naive Jewish ingenue arrives at the offices of his uncle Phil, a big studio executive in Hollywood, where he fetches up jobless and friendless after leaving New York.

After Bobby turns down the advances of a first time hooker, also in Hollywood to make her name, a tender romance blossoms when Uncle Phil asks Vonnie to show Bobby the sights. It slowly emerges that Uncle Phil also has his finger in this romantic pie, promising to leave his wife Karen for the young brunette, in an on off affair that is celebrated when Vonnie, star struck by Phil’s power play, gives him a signed letter from Valentino for their one year paper anniversary. Meanwhile in New York, Allen plays up the other side of America where Bobby’s classic Jewish mother (a perfectly tart Shae D’Iyn) is keeping the homefires burning, in bitter disgruntlement with her loser of a husband (Ken Stott) “you don’t even have a Jewish head”, and her other son Ben (Corey Stoll), a financially dodgy nightclub owner who deep-sixes his rivals in liquid cement.

Splicing this tender but tragic love story with swipes at the Hollywood machine – “you wouldn’t know me –  I’m a writer”, and his beloved Jewish roots – “when a Jew cooks something it’s always over-done to get rid of the bacteria” – CAFE SOCIETY also offers some sublime musical choices from the vintage jazz world (often performed live) in what is Woody’s wittiest and most incisive film in a long time. Lensed by the thrice Oscar winning DoP Vittorio Storaro, this is a gorgeous film to look at as well as an enjoyable one to watch and the ups and downs of the romantic underpull keep things nicely taut in its modest running time. Jesse Eisenberg comes into his own as Allen’s alter ego, morphing seemlessly from a tentative “deer in the headlights” to a shrewd businessman but decent and disillusioned lover and Kristen Stewart is both vulnerable and alluring as the cunning love interest with her eye to the main chance. Steve Carrell is commanding as the power-punching megalith weakened by the lure of love. At 80 Woody Allen offers a happy ending in a story where the bad get their comeuppance, successful men make the best lovers, and clever women know the difference between the two. MT