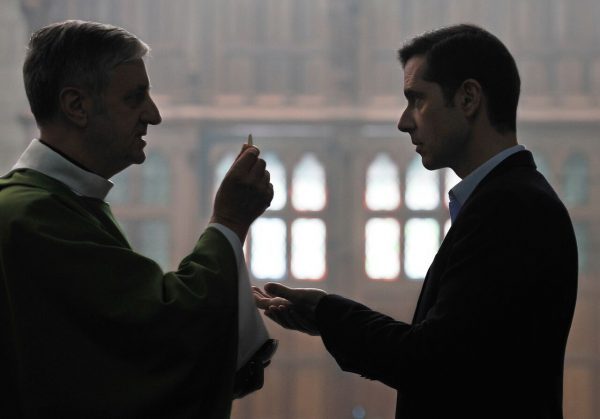 François Ozon is known for his satirical wit and his relaxed views on sexuality. His Grand Jury Silver Bear winner By the Grace of God takes on the theme of abuse in the Catholic church and its affects on three men. But no matter how hard-hitting their experiences may be there is always a flinty glint of Ozon’s brand of dry humour peeping though to light the dark clouds of its heroes’ despair.

Grâce à Dieu is based on the real case of Father Bernard Preynat who in 2016 was charged with sexually assaulting around 70 boys in Lyon, François Ozon portrays the victims as mature men but reveals the lifelong wounds they have sustained. At the same time, the film criticises the church’s silence on paedophilia and asks about its complicity. As of January 2019, Cardinal Philippe Barbarin is standing trial for ‘non-denunciation of sexual aggression’.

Ozon casts three actors at the top of their game to play the trio: Melvil Poupaud is Alexandre a wealthy Lyonnais banker who has found success with his wife Marie (Petit) and five kids. He appears to be the one least damaged by the Preyan but when it emerges the priest is still working with kids, Alexandre decides to risk jeopardising his own settled existence and blow the whistle. His parents never gave credence to his feeling back in the day, and are still making light of them, but he goes ahead with a difficult confession to the Catholic authorities. It then turns out that happily married François is the next victim, and Dénis Menochet is less cautious about his confessions, bringing his explosive emotional potential to the part. Perhaps the worst affected is Emmanuel (Swann Arlaud) who claims his whole life has been traumatised by what happened, making it difficult for him to deal parent’s divorce and destroying his ability to connect emotionally with women, and this is played out in some incendiary scenes with his partner (Daure). Gradually others join the cause and we learn how each is struggling with their private demons while creating the self-help organisation ‘La Parole Libérée’ (The Liberated Word) is just the first step.

Some of the confessions are explicit and we’re never quite sure how far Ozon tipping the balance between salaciousness and pure honesty. This is also noticeable with reference to Lyon’s gourmet traditions and fine wine and there are frequent allusions to food which is considered as important as upsetting matter in hand when the men meet up, often leading to amusing non-sequiturs: (“anymore quiche anyone”?).

The magnificent Basilica Notre Dame de Fourvière dominates the impressive opening scene as the Cardinal Barbarin hoists a golden cross over the city, almost as a blessing for what is to come in this meaty, affecting and enjoyable saga that richly chronicles a true story whose implications and repercussions are still unfolding in the present. MT