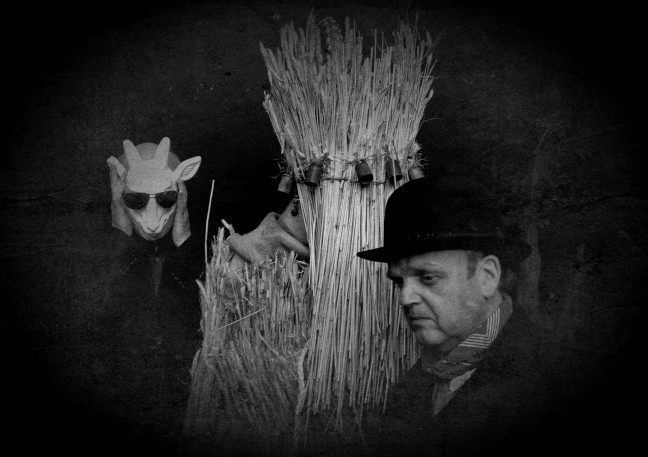 Experimental filmmaker Andrew Kötting is very interested in English journeys. Whether on foot or in a duck-shaped pedalo to Hackney – as in his previous outing, Swandown (2013) or on the coastal foray of his feature debut Gallivant (1996) – these gentle filmic wanderings unearth a stream of thoughts and memories that are nestling in the English countryside scattered by those that lived or worked there before he came, and waiting to add flourish and meaning to his own mysterious musings.

Before the 2012 Olympics, Kötting joined regular collaborator Iain Sinclair (in a Savile Row suit), for a wry and quintessentially English journey by pedalo on an expose of the thoughts of a private few. Taking inspiration from Sinclair’s psychogeographical work ‘Edge of the Orison’, BY OUR SELVES, sees the two together again in selvine seclusion, apart from a few close friends – a bewildered Toby Jones and his father Freddie, Kötting’s daughter Eden (as Dorothy from the Wizard of Oz) and Kötting dressed as a straw bear –  as they trace the tortured yearnings of John Clare, a humble English poet who “went mad”, was committed to a mental asylum in Epping Forest and thence attempted to reunite with his last true love Mary Joyce, rather than with his actual wife who had sent him there. Based on Clare’s book ‘Journey Out of Essex’, and diosyncratic as ever, the troupe wander from the wayside to discover their own unique and deeply affecting impression of the woodland experiment.

BY OUR SELVES follows Toby Jones (Clare), as he meanders, slightly disorientated, through this mystical woodland, bear in tow and occasionally taking control until it finally takes the lead. Sinclair joins him in a ‘Wicker Man’ style mask, lending a slightly troubling tone to the piece as he reads from Clare’s poetry and engagers with those they stumble across on the way. Later the pair are joined by Simon Kovesi who opines on the poet’s work in greater detail, before engaging with Sinclair in a pugilistic punch-up, as passers-by occasionally follow on conversing in a desultory way.

It is a pleasingly English portrait of a fairytale woodland, exquisitely framed and captured in delicately rendered monochrome visuals by Nick Gordon Smith; often voyeuristically tripping over the shoulders of Jones or viewing him, gnome-like, from afar surrounded by the gentle carpet of casual countryside, with the blend of ambient sounds and songs that softly envelope them in an atmospheric bubble of downy black and white.

BY OUR SELVES was made on a shoestring budget, largely financed by kickstarter, and proves that with the right blend of experimental wizardry, perfectly pitched performances from the pros and some pizzazz, perfect pictures can give pleasure to the arthouse crowd. MT

BY OUR SELVES SCREENS DURING FID MARSEILLES