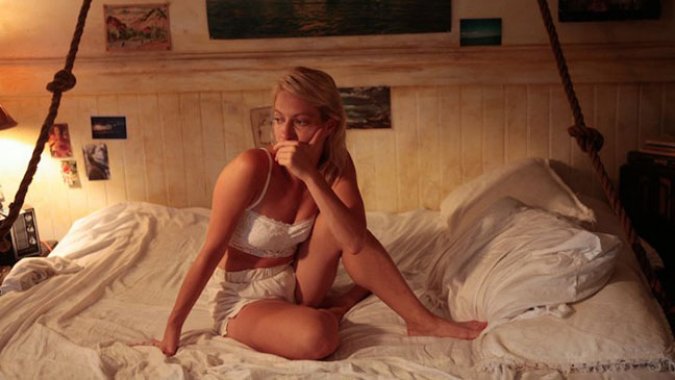 It is always tempting to try and follow in the footsteps of your favourite directors with your first film: writers/directors Remy Bennett and Emilie Richard-Froozan certainly have internalised much of David Lynch and Terence Malick’s work, but just being copy-cats is not enough, even if the film is set in a retro 70s aesthetic.

Pernilla (Bennett) and Patrick (Louison) are a couple with a secret buried in their childhood disclosed in enigmatic, dreamlike images. After the death of Flora, another childhood friend, Pernilla turns up on Patrick’s doorstep in the deep South, complaining that he has neglected her by not attending Flora’s funeral. He certainly makes up for it in the rest of the film; the two being more or less inseparable. Since the secret is not revealeduntil the final scenes (when everyone ceases to care), the audience has to guess why the couple have such a torrid relationship. Patrick is obviously a sadist, but Pernilla – who permanently runs around in various stages of undress – is only too keen to suffer physical and psychological abuse. This comes in the shape of Mena (June), a blonde with whom Patrick first has a one night stand, then, on her re-appearance (to collect her jacket!), he tries to make love to her in front of Pernilla, who is only to willing to watch before Mena runs off in disgust.

Apart the Southern preacher and freaky bar scenes, the narrative is nothing but a series of oddities – a collection of weird, pseudo-sexy and often involuntarily funny episodes.The total focus on atmosphere creates some wonderful images, but this reduction to a pure formal exercise leads to an audience detachment from which BUTTERCUP BILL never recovers in spite of the spilling of beans at the end. To call the film pseudo-mystic would be an understatement: its lack of any coherence degrades it to a freak show; with DOP Ryan Foregger being the only one able to claim credits. AS

ON GENERAL RELEASE FROM 4 SEPTEMBER 2015