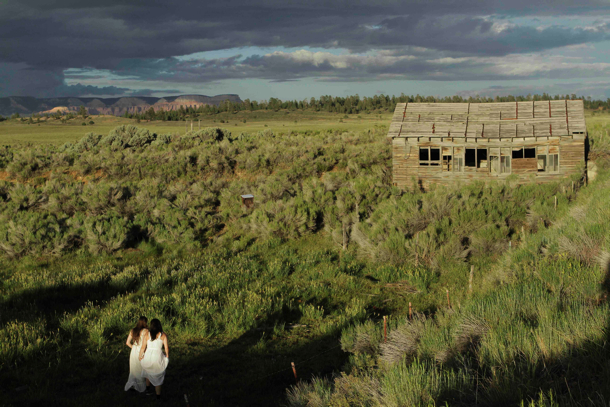 In Josephine Deckers debut feature BUTTER ON THE LATCH, we first meet the central character Sarah, when she stumbles around dreamily in Brooklyn and sleeps with a man she picked up in a nightclub. Suddenly, she appears again at a summer festival of Balkan folk music in some woods near Mendecino, California. There she seems at first to settle down with girlfriend Isolde, but then the two get lost in a wood and nearly set it on fire. Exchanging intimacies and secrets, the two become become increasingly closer, but something is worryingly wrong with Sarah. We might connect her otherworldliness with the Balkan stories of people beings possessed by dangerous animals, like dragons (clearly shades of Tourneur’s Cat People). But before we are able to guess further, Sarah suddenly turns to the young Steph, but their relationship culminates into a dramatic and violent end near a lake.

This is truly an enigmatic film, characters are only sketched, images are often blurry, jump cuts interrupt dramatically and the narrative seems to be propelled forwards by the director/writer with a near manic force – but then, this is a portrait of a psychotic woman. Sarah stumbles through life, not knowing her motives, second-guessing herself and never knowing what is important or not. She picks people up at random, not knowing anything about them. She takes a chance on life, but is obsessed by some deadly impulse, which drives her on.

The aesthetic style is uneven, the camera, hectic most of the times, suddenly gives us respite, with nature and inventive singing images. The music is as oblique as the whole film and its title, and Sarah Small as the unfortunate young woman is quiet impressive.It would be wrong to call this film impressive, but for sheer guts to try something different – even if it not always comes off, Decker deserves some praise. AS

BUTTER ON THE LATCH SCREENED DURING BERLINALE 2014