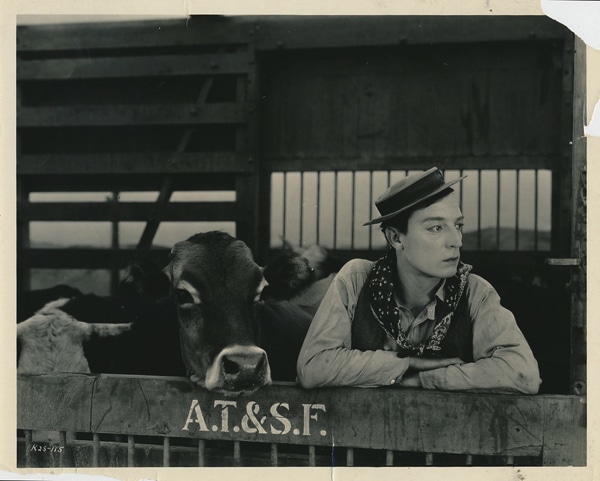 The celebration of Buster Keaton on Blu Ray continues with Eureka’s three film package of Our Hospitality, Go West and College. These features have been lovingly restored from the best film elements available. If you own their previous Keaton issues then this set is self-recommending. 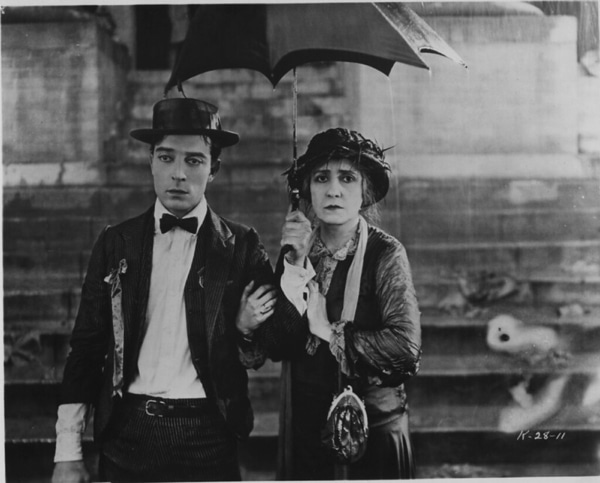 I’ll begin with a masterpiece, Our Hospitality (1923). In this wonderfully charming and tender film (above) we have Keaton successfully integrating amusing set pieces (not merely clever gags) with a dramatically involving story. A family feud, with murderous consequences, is an old idea, ripe for comic exploitation: suspense being created in order to ward of bloodshed. Not only does Keaton achieve his reconciliation, through a brilliant inventiveness and tour de force timing, but films Our Hospitality‘s story, of the McKay’s v the Canfields, against the backcloth of a lyrically realised 1830s American South.

The film’s period charm is enhanced by sequences featuring a Stevenson’s Rocket train complete with stagecoach carriages. Like Keaton’s The General a train becomes a quirky character in its own right: watching it bravely travel over a rocky terrain proves irresistible. Two very funny incidents involve the shifting of the track to accommodate a wilful donkey, and the moment an old man pelts the train driver with stones, so that logs of wood are then thrown back and collected by the villager to be used as firewood. Halcyon days they maybe but vulnerable to interruptions.

In order to survive Keaton mustn’t leave the house – the Canfield’s code of Southern hospitality says they will not kill a McKay whilst indoors. At one point Keaton has to dress like a woman, run out the building and create a decoy by dressing a horse in his discarded clothes. A superbly paced comic rythm is established as McKay desperately flits in and out of the Canfield home and although guns are fired a lot in the film no one gets injured.

At the end when peace is achieved and the Canfield’s lay down their pistols, it turns out the victimised McKay was carrying an armoury far bigger than their own. Keaton’s most dangerous moment actually occurs attempting to rescue the Canfield’s daughter (played by Natalie Talmadge, Keaton’s wife) from rapids flowing into a waterfall. Keaton does it with such poetic skill – and not a stunt man on the set!

Although Go West (1925) never achieves the sublimity of Our Hospitality this is a lovely film: captivating, surreal and even flirting with sentimentality. That last objective is much more Chaplin than Keaton territory – David Robinson (Chaplin’s great biographer) noted that Keaton’s friendship with a steer named Browneyes, recalls the tramp and flower girl affection in City Lights. “Do you need any Cowboys today?” asks the forlorn New Yorker named Friendless (Keaton) to the ranch owner. A classic inter-title question that gets him the job. Of course the city slicker does everything wrong but finds consolation with Browneyes.

Apparently Keaton was disappointed with the film because he couldn’t get the cows to stampede through the town fast enough in the final scenes. Keaton does manage to evoke both their docility and action to splendid surreal effect. I love how the steer stroll into department stores, lumber into a barbers and agitate the local police force. And I can’t help thinking that Bunuel’s L’Age d’Or (with its dead donkeys over a piano) wasn’t influenced by Keaton’s Go West. Bunuel’s on record as adoring Keaton’s filmmaking. Of Keaton’s expression he said it was “as unpretentious as a bottle.’

Of course the clown-bottle genius never smiled. In College (1927) Keaton puts himself through so much physical effort trying to prove his athletic prowess to the students (and his girl) that you almost want him to break into the relief of smiling: then as a boatswain he eventually triumphs – the irony of the film is that in reality Keaton was arguably the most athletic of the silent comedians.

College has some excellent gags and as in Our Hospitality and Go West Keaton is revealed as a master of framing and deployment of space. However the film doesn’t have a coherent structure, being more a succession of incidents that are deftly, but routinely orchestrated. A very different but more rewarding college silent movie is Harold Lloyd’s The Freshman. Lloyd’s breezy personality is more at home in this
material.

I could have reviewed this entertaining boxset just by describing in great detail the wealth of gags. But words would fail me. Here we have a genius on the road to perfection; Keaton’s first fully fledged expression of greatness. With his deep impassive countenance, Keaton orchestrates his antics while remaining acutely aware of his commanding presence as the world implodes around him, knowing that, philosophically at least, he will always rise stoically above every threat and misfortune. ALAN PRICE 2020.

NOW ON BLURAY COURTESY OF EUREKA MASTERS OF CINEMA