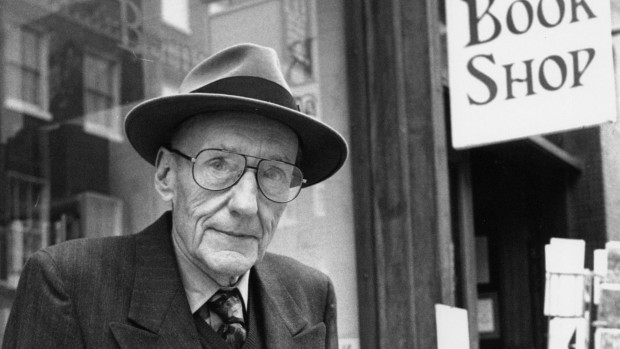 What started as an expanded version of Howard Brookner’s MA thesis in 1978, became the portrait of beatnik author William S. Burroughs (1914-1997).

The film premiered at the New York Film Festival and was based on the first time writer/director’s extensive footage that featured over a hundred hours of his subject shot between 1978 and 1983. Soon afterwards the documentary ‘got lost’, but Brookner’s nephew Aaron rediscovered it a few years ago in Burroughs’s flat in 222 Bowery in New York, ‘guarded’ by the poet John Giorno. Aaron not only helped with the restoration of the film material, but set Howard Brookner a moving tribute with his own documentary Uncle Howard, his subject having died aged thirty four in 1984 of complications from AIDS, a few days before his first feature film, Bloodhounds of Broadway, starring Madonna, was released.

It tells how William S. Burroughs was born into a wealthy family in St. Louis in 1914, and lived on for 83 years, despite “having ingested enough heroin to kill several entire rock bands”. He walks through the film like his own ghost, dressed immaculately in expensive suits, looking very much like a banker. When he turned up to give his readings in the off-beat New York venues, security staff at the door often refused to admit him, fearing he was a undercover agent. Burroughs shares much of his outward demeanour with another native of St. Louis, the poet T.S. Elliot (1888-1965), who actually worked as a banker, and cultivated the look of an aristocratic British gentleman covering up the turmoil of emotional contradictions.

Burroughs comes over as robotic, not only in his readings, but also when he talks about his past and his monotonous delivery often makes this a tough watch despite its fascinating content. When recounting the accidental death of his wife Joan Vollmer in Mexico in 1951, he seems to be talking like bystander – not a man who shot his wife, restaging the William Tell incident – a glass replacing the apple. His relationship with his son from this marriage, William S. Burroughs jr., was fraught, the young man died during the shooting of the film of liver cirrhosis in his mid thirties. Instead, Burroughs invested all his emotions in James Grauerholz (*1953), who was introduced by Allen Ginsberg into the circle. Grauenholz became Burroughs’ private secretary and ‘protector’ for the rest of his life, and his literal executor after his death. When William Burroughs muses over old family photos with his brother Mortimer in St. Louis, there is no hint of how different the brothers were, apart from one remark by Mortimer criticising his brother for the language used in Naked Lunch. Furthermore, when talking to the family gardener about his dead son, Burroughs very much comes across as the understanding patriarch of a feudal family. The true Burroughs emerges much more when talking about Wilhelm Reich’s ‘Orgone Box’ (which was supposed to give physical health through orgasms), to which Bill credits his longevity. The same Reich – a former student of Freud – who, incarcerated in an American prison, blamed Stalin for his imprisonment. And Burroughs really cuts loose when re-enacting a scene from his Naked Lunch, clad in a bloodied surgeon dress, performing a messy operation.

DoP Tom De Cillo conjures up a morose landscape, the overriding feeling is sadness as Burroughs traipses catatonically through the film like a, bereft of any compassion or empathy. He is a great raconteur but there are no smiles, let alone laughter – never anything but William S. Burroughs. The director’s puppy-love for his subject cannot hide a man caught in himself, lonely and terminally depressed, whatever the circumstances. Burroughs the author seems to have scarified everything about himself for his art – alone for decades in his symbolically soundproofed and windowless flat in New York’s Bowery. AS