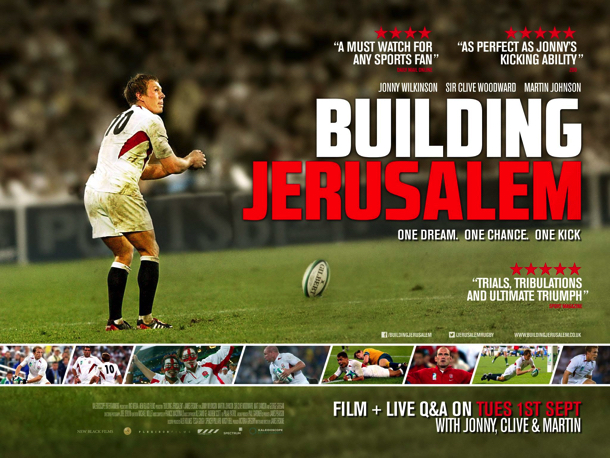 Erskine’s chronology of the rise of the England Rugby Union team from whipping boys for the teams of the “Southern” hemisphere, like Australia and South Africa, to the triumph of becoming World Champions in 2003 – beating Australia in Sidney in the final – features the main protagonists Jonny Wilkinson, Martin Johnson and coach Sir Clive Woodward.

As far as hagiographies go, Building Jerusalem can compete with the best. Erskine starts with downtrodden England, being beaten by ridiculous scores like 76:0 by Australia in 1998. Afterwards, Clive Woodward England’s coach since 1997, introduced a new and innovative training program, also helped by the fact that Rugby Union had turned professional in 1995. The latter development was the result of the TV war between the Australian Kerry Packer and the Australian born Rupert Murdoch. There were some bumps on the road to success, like the resignation of the England captain Lawrence Dallaglio in May 1999, because the NOW discovered that he might had been involved in drug dealing. Dallaglio was replaced by Martin Johnson, but got the skipper role back in 2004, when Johnson retired. Most interesting is the involvement of Dr. Sherylle Calder in the development of the team; the world renown hand-eye coordination coaching specialist not only improved the speed with which the players handled the ball, but also taught them Afrikaans, so that the team could understand the signal calling of the SA team they faced during the World Cup in 2003. Alas, Dr. Calder went to help South Africa to defeat England in the 2007 World Cup Final in Paris.

Building Jerusalem suffers from its strict chronological order, as well as from the fact that nearly the whole team development is relegated to being an entrée, just to re-live and celebrate that “glorious” day in November 2003 when England defeated Australia on home soil by 20:17 after extra-time, with a dramatic drop goal by Jonny Wilkinson scored in the last minute. This way, Building Jerusalem (with Hubert Parry’s music triumphantly blasting over the end-credits) is more a fan’s tribute than an analytical document. AS