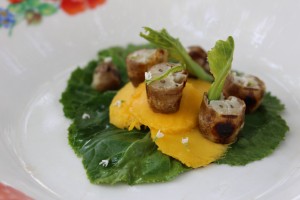 Director/DoP Andreas Johnson (Al Weiwei: The fake Case) tries to get the audience to accept a foodie future that largely consists of bugs and maggots. In 2050 these critters might be on our menu, to cover our need for protein, when normal sources run out. In BUGS Chef Ben Meade and the food researcher Josh Evans from the Nordic Food Lab in Copenhagen (which launched the famous Noma restaurant) take on a peripatetic journey to the future of the culinary world.

With the planet’s population up to nine billion by 2050, this documentary suggests that 70% of our protein food intake will come from insects, bugs and maggots. And the pair set off to Europe and further afield places like (Uganda, Kenya, Mexico to show us the future. The two indulge in whatever comes their way on the menu, and they seem to enjoy it, amidst cries of “Best maggot/insect/bug I ever tasted” ringing out again and again, as they  gladly devour tasty morsels, or slurp honey from sting-free bees in Uganda. But we never learn the names or the history of the people interviewed in these distant eateries; the film concentrates on the action –  digging into huge anthills, where the adult researchers squash the termite queen, whilst a couple of boys at the neighbouring anthill are skilled in bringing the “delicacy” out in one piece.

Reade is perceptive, he does not want to industrialise the maggot culture fearing, rightfully, that the giant industrial corporations would monopolise and cash in on this eco-conscious fare for their own interest: meaning profits. But their enthusiasm sometimes gets the better of them: like in Kenya, when Reade exclaims “who needs a healthy bank balance, when you have such tasty and healthy food for free in your own garden”. Whilst the food is indeed delicious and superior to our own supermarket ready-meals, it is the sheer and utter poverty in many African countries that has driven the population to cultivate their anthills for food.

Johnsen, who has introduced us to the wriggly foodstuffs that might be our diet of the future, should be praised for his ground-breaking effort. But as with most founding fundamentalist, they leave some details unanswered, and some of us need more information, particularly about the background and work methods of the interviewed food experts abroad. Nevertheless, anybody wanting to know more, can travel to Scotland where Ben Reade is chef at the Edinburgh Food studio, or to Copenhagen where Roberto Florez cooks meals (based on sustainability) at the 5-star Noma. AS