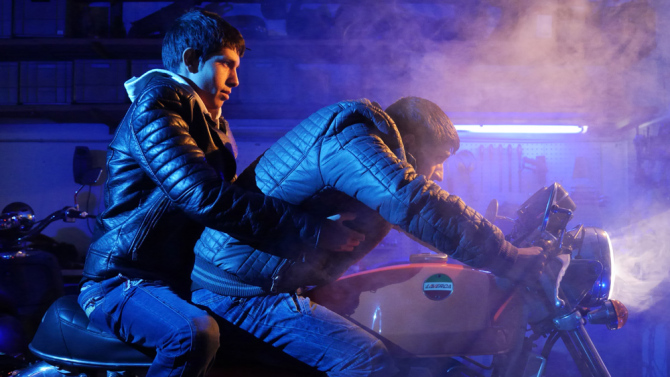 Brothers of the Night are just that. In an underworld, against the backdrop of the Danube and Vienna’s skyline, these sultry little leather-clad pixies come from Roma origins in Bulgaria to try their luck and make a fast buck as bisexual prostitutes with over-inflated opinions of themselves and their sexual allure but gathering strength, comfort and a sense of community from their close brotherhood, far away from home. Cigarettes and mobile phones are their props as they coyly toy with the camera in Patric Chiha’s contempo snapshot of the Austrian capital’s underbelly.

Lacking a formal the documentary simply meanders through the various stories of these Bulgarian adventurists who arrive in Vienna in search of ‘normal’ work dreaming of a city paved with gold. But it doesn’t take them long before they realise that there’s easy money to be made in the sex trade and so they quickly slip into a life of nocturnal seduction, selling their bodies to all sorts without a qualm; ‘doing business’ with straight men, gays and the transgender brigade, in a bid to support their kids back home and wives they often no longer love. Klemens Hufnagl’s opening wide angle shots of the Danube give way to more exotic and vibrantly filmed intimate interior scenes where the boys talk candidly to the camera and to each other, recounting their sexual adventures with a certain sense of pride as they trade and exchange tips on how best to leverage their sexual favours and make money ‘between the sheets.’ An eclectic soundtrack of ethnic and classical music elevates this spicy insight into Vienna’s Roma community, but offers little more than mild titillation for the LGBT crowd . MT

BROTHERS OF THE NIGHT PREMIERES AT BERLINALE 2016 | PANORAMA DOKUMENTE STRAND