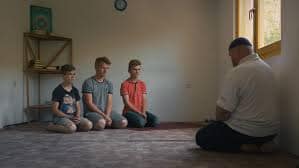 Brotherhood is a male-centric cinema verite portrait that sees religious and paternal dominance colliding with the present in a close-knit Bosnian rural community. Screening in the Filmmakers of the Present competition at thus year’s Locarno Film Festival, this is an impressive feature debut for documentarian Francesco Montagner .

Montagner and his DoP create a real sense of remoteness in the lush bucolic landscapes of deepest Bosnia where the family raise sheep, discuss Islam and still bitterly remember the Serbian conflict. Were it not for their mobile phones it would be difficult to believe that shepherd brothers Jabir, Usama, Useir lived in the modern day. Their traditional farmstead seems cut off from civilisation and their strict Muslim father keeps a draconian control over their lives with a regime of daily prayers. But when he is convicted of a religious crime that will take him away from the family for several years, the three brothers must take over and the family dynamic shifts dramatically with unexpected consequences.

Life carries on as normal for a while as the boys tend to their livestock, the youngest becoming increasingly difficult to handle. The world of Islam is never far away on the internet, and during the long winter evenings by the fire they discuss their faith and download live footage encouraging them to rise up against ‘the infidel’, Islam encroaching on their collective consciousness. Naturally school work and studying runs contrary to everyday life as shepherds, particularly when seeing off wolves seems more important than passing exams. But without their strict father figure to keep them under the cosh, their existence is increasingly threatened. Beautifully captured by Prokop Soucek’s sensitive camera, this is a revealing look at traditional rural life in an Islamic household, even if the ending is rather simplistic. MT