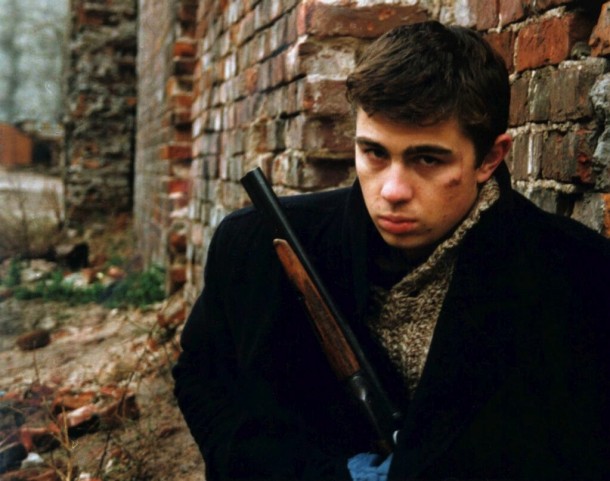 Played by fresh-faced James Dean lookalike, Sergei Bodrov Jr, Danila is then dispatched to his elder brother, the chillingly venal Viktor (Viktor Suhorukov), a freelance hit-man in the local mafia, called ‘The Tatar’ by his rivals. Beaten-down and derelict, St Petersburg is years away from architectural makeover for its tercentenary. It appears the poor relation of Moscow; a provincial backwater with vast open boulevards echoing skeletons of past glory, its down-at heel-denizens peddling their black-market goods at gun-point from mafiosi attempting to extort their own cut of the paltry earnings as protection money.

In return for temporary board and lodgings, Danila is tasked with taking out the local Chechyen warlord who roams the farmers’ market (and there’s nothing twee about this market) competing with the ethnic Russians and proving, at the end of the day, that everyone’s a racist when the chips are down.  But there’s a cheerful brassiness to this hard-boiled portrait of poverty and power-play. Very much champion of the people, Danila’s her0-worship of his older brother is sadly misguided and despite being a killer crim of the deadliest type, he enjoys petty acts of local heroism, such as forcing money at gunpoint out of some cripples who refuse to pay their bus fare home. He moves in briefly with a trailer-trash love-interest Sveta (Mariya Zhukova) who will do anything for money while her husband is doing time and also hooks up with Kat, who peddles drugs and hangs out in MacDonalds.

With it’s late eighties soundtrack and bronze-tinged cinematography, it all feels very dated but in a way that make this thoroughly enjoyable and authentic-feeling outing a cult classic in its own right.  Despite his soft features, Danila emerges a real cynical operator in the style of Scorsese’s Goodfellas, cutting a swathe through the local crime community like a knife through butter and soon St Petersburg is severely cramping his style and he’s flexing his muscles for a move to Moscow.  MT.

BROTHER IS THE FIRST IN THE KINO KLUB’S BALABANOV RETROSPECTIVE THAT TAKES PLACE IN THE MAYFAIR HOTEL FROM FEBRUARY THROUGH TO 25 MAY 2014, COURTESY OF ACADEMIA ROSSICA.