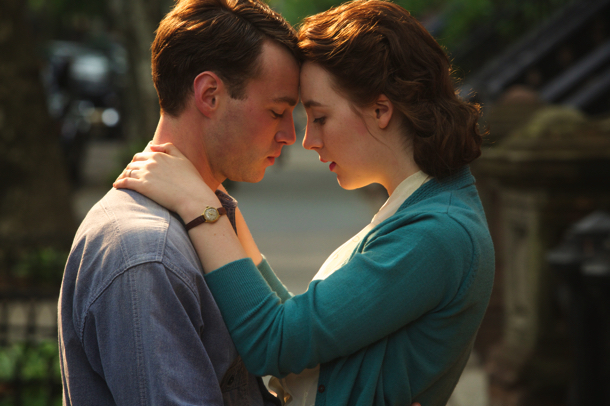 In this lush and impressively-mounted drama John Crowley (Boy A) goes for an epic but somehow falls short but Nick Hornsby’s screenplay cleverly captures the zeitgeist of a tight Catholic community in Southern Ireland in contrast to the promise of new horizons in Brooklyn during the fifties.

Adapted from Colm Toibin’s novel, Saiorse Ronan stars as Eilis Lacey, a young ambitious Irish woman with few prospects beyond working in the local village grocers, where the bitter-tongued owner (Brid Brennan) gives her a difficult time. Ellis’ sister Rose (Glascott), already marked by an illness, is saintly enough to forego the opportunity to emigrate and stays to look after their widowed mother (Jane Brennan), while Eilis sails to the New World and New York.

In Brooklyn, Ellis finds a home in the boarding house of Ma Kehoe (Walters), who supports the newcomer, appreciating her classy naivety. The local Catholic priest (Broadbent), also keeps an eye on her, financing her evening studies in bookkeeping as things fall into place. Falling in love with an Italian plumber Tony, Eilis starts to blossom in her new home. But after a family tragedy she travels back to Ireland, where he sophisticated and confidence impresses the locals and upper-class Rugby player Domhnall Gleeson (Farrell). No longer a one-trick pony, Eilis has to decide between two men and two continents.

Despite being shot in Montreal, BROOKLYN is truly at home in 1952: François Seguin’s sumptuous production design, on both sides of the Atlantic, is flawless. Hornby’s script reduces the story to moving moments between the lovers and the sisters, laced with occasional wit (Julie Walters provides this with aplomb). Even if we overlook the lack of references to the Korean War and the general climate of the Cold War, BROOKLYN goes for the saccharine. Young Eilis falls on her feet in a series of lucky breaks, surrounded by an army of kind souls. The standouts are Julie Walters as Ma Kehoe, Emory Cohen who sensitively evokes young love and Jenn Murray, as Dolores, the only sardonic young girl in the bunch. Positive Catholic values seep through in a world where everyone seems to be well-intentioned, only wanting the best for this ‘damsel in distress’. Her development from a shy teenager to the “Vogue look-alike” after her return from New York, is never really explained, but Ronan handles the part with considerable skill, transforming to a woman with the confidence supplied by Tony’s love. But the script does rather stretch the imagination back in Ireland where Domhnall’s posh family tries to enhance their son’s chances with Eilis, and a job in accounting is miraculously served to her on a plate.

DOP Ivan Belanger’s images are soft-lensed primary colours, a picture-postcard of the fifties. The slow motion walks and runs remind us of the 70s; everything, city or countryside, is photographed like a travelogue – an achievement, considering Brooklyn’s status as a homestead for emigrants. Performances are totally in line with the sugary sentiments, the close-ups prove that the world is a good place, bereft of anything which could contradict the feel-good factor. Crowley has succeeded in creating a world of dutiful Catholic souls in Ireland and Brooklyn, beavering away for the good of mankind, creating a feel-good-factor which never really existed. BROOKLYN is an upbeat charmer that slips down like silk when the reality was actually made of nylon. MT