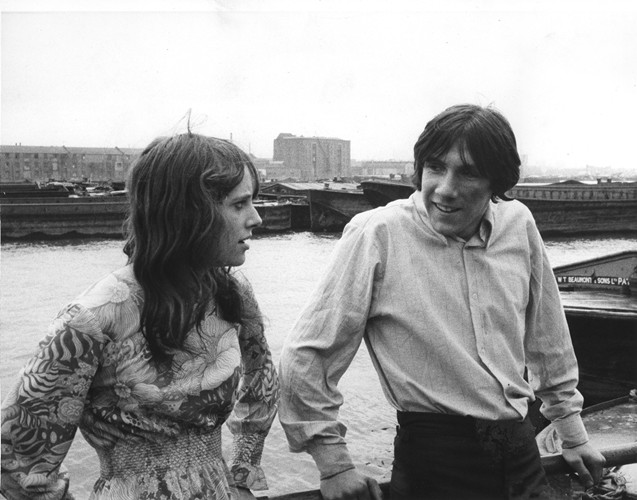 There was once a working class street style known as ‘suedehead’ that was influenced by skinhead and mod culture, but still allowed you to have longer hair, Doc Martin boots and Combe coats. Fashion is one of the many pleasures of Barney Platt-Mills’s 1970 film BRONCO BULLFROG. Yet Bullfrog isn’t a dated costume piece but a poignant and funny drama of bored, inarticulate young people, with narrow horizons, little money, into petty crime and trapped in working class East End London. “Not much to do round here?” moans young Del Walker (as Del Quant) an apprentice welder who’s in a street gang and desperately trying to escape, with his girlfriend Anne Gooding (as Irene) to Newhaven and the countryside.

BRONCO BULLFROG has a slight plot. It’s all about character, feelings and atmosphere. The kids might be inarticulate but they’re likeable, vulnerable and well observed. Speech rhythms, long pauses and body language are delivered with a great spontaneity by Bronco’s cast and director. The film is influenced by Italian neo-realism and creates a series of sketches (beautifully photographed in black and white) that keeps its reality honestly lived, and never pulled into obvious melodrama. One scene has Del and Irene driving, on his motorbike, into the West End to see a film. When they get to the cinema (showing ‘Oliver’) they see that the seat prices are far too expensive. The next scene has them in a Wimpey Bar where Del says that it was a shame that they couldn’t get into the pictures, to which Irene replies that it would have been a waste of money anyway. This all takes about two minutes of screen time, has minimal dialogue and yet says volumes about youthful frustration, making do, class and aspirations.

None of the young cast had acted before. They were taken under the wing of the now legendary theatre director Joan Littlewood and encouraged to get involved in theatre work. Director Barney Platt-Mills, who worked with Littlewood, managed to raise £18,000 pounds, to shoot a partly improvised and scripted film in six weeks. Bronco Bullfrog was the result. A film that the critic Alexander Walker said would still be spoken of very highly in years to come. If you want to decide for yourself then ask the NFT Southbank to screen it again soon, or buy the BFI dvd / blu-ray issued in their British Flipside series. And why is this film called Bronco Bullfrog? Well that’s the name of the ex-borstal guy who Del, and his mates, meet up with to do a railway holdings robbery. Coming back to fashion you just have to see Sam Shepherd (as Bronco Bullfrog) wearing his late sixties floral shirt and tie!

Bronco Bullfrog is a film unlike any other production of its time. My only possible comparison might be early Ken Loach, without the tragedy, or early Truffaut with all his generosity. For me, it’s a classic. Alan Price©2015

Alan Price is a poet, short story writer and scriptwriter. His collection of poetry, OUTFOXING HYENAS (Indigo Dreams 2012) can be sampled on the website

DEDICATED TO REDISCOVERING CULT BRITISH FILMS THAT MIGHT OTHERWISE BE FORGOTTEN, THE BFI’S FLIPSIDE RANGE FLESHES OUT OUR NATIONAL FILM HISTORY WITH A SERIES OF DVD/BLU-RAY EDITIONS (NOW 26 TITLES STRONG) FROM FILMMAKERS IN DANGER OF BEING FORGOTTEN. Available on amazon.co.uk