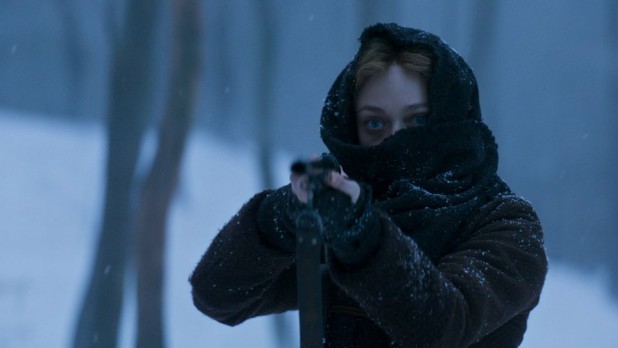 Dutch writer/director Martin Koolhoven (Winter in Wartime) brings a new chapter to the history of male-on-female violence depicted in films. That this all-out exploitation feature is sold as a feminist revenge story makes it even worse.

Set as 19th century Western and told as an elliptical flashback story, BRIMSTONE is an ultra-violent, voyeuristic joy ride featuring a deranged Reverend (Pearce), who hunts down his daughter Liz (Fanning), to fulfil his God-given right to incest, quoting the biblical story of Lot and his daughters as an example. Having driven Liz’ mother Anna (Van Houten) into suicide, the Reverend then enjoys sex with his daughter, who happens to be also his granddaughter. Liz has a long history of male inflicted suffering in a brothel, where Koolhaven makes us watch endless minutes of hate-fucking, looking radical even on a common or garden porn site.

Koolhaven has a lot to answer for: why, for example, did he direct a six-year old girl being asked the question “Has your mother told you what a whore is?” Or the tongue slicing scenes of the female victims – did he really believe this is not exploitation at its worse. At least he saved on dialogue: the female characters have next to nothing to say, they have to endue in silence. At least sometimes, the director indulges in self parody, when the Reverend tells his victims that they should be aware of men, who are wolves in sheep’s clothing, only to howl at the moon immediately after.

Filmed professionally with long panorama shots by Dutch DoP Rogier Stoffers the eye-candy (and a calling card for Hollywood), Brimstone breaks all records for sadism against women, making the Italo-Western of the 1970s look harmless. Despite this, I’m prepared to concede that there should be no censorship. but equally convinced that the critic should have the right to advise that certain films do not deserve to be watched. AS

ON RELEASE FROM FRIDAY