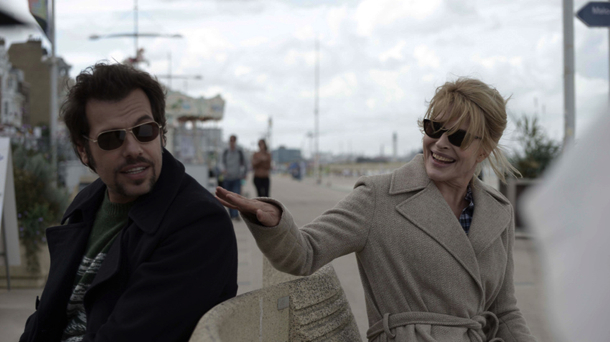 A classic ménage à trois is at the heart of this clever French drama. Director, Marion Vernoux, clearly appreciates and understands the intricacies of female sexuality and particularly those of a beautiful and intelligent woman who has been much admired and who, now in her sixties, still values her powers of attraction and is looking forward to the future. Loosely based on co-writer Fanny Chesnel’s book “Une Jeune Fille aux Cheveux Blancs” the film title has a dual meaning: as the ‘sixties plus’ retirement club in a small French seaside town and the positive outlook of their latest member Caroline (a fabulously luminescent Fanny Ardant) who has recently hung up her dentist’s drill but still has a twinkle in her eye and an upbeat frame of mind.  Her family are less confident in her social abilities, projecting onto her their own clichéd ideas of retirement as a time of dusting down the zimmer frame, knitting and looking after grand-children. But the languidly sensual Caroline is having none of it: she casts a quietly disdainly eye over her fellow retirees and patronising instructors and makes a beeline for the door. But when the dishy 30-something computer teacher Julien (Laurent Lafitte) gives her some encouragement, and not just with her keyboard skills, she decides that Les Beaux Jours is a club where she definitely wants to be a member.

The appeal of this story lies in the authenticity of the telling. Like most affairs, the success of this one is based on initial spontaneity and chemistry but this is no ‘cougar’ story: although it just so happens that there is a large age-gap between them. Caroline is not looking for a younger man, or any man, for that matter: she’s contentedly married to Philippe (an amusingly laconic Patrick Chesnais) and content to see where her feelings take her. Julien just loves women; he’s not obsessed with older women but at nearly 40 is also at a vulnerable turning-point in his life, where he’s no longer necessarily seen as marriage material but equally wants to have a relationship rather than just endless conquests. The sex they enjoy is languorously romantic, not desperate or needy. There are some amusing moments when Caroline attempts to hide the romance from members and her local friends, but when Philippe finds out he’s not devastated just resigned, disappointed and ready to discuss the future. The denouement is not earth-shattering but completely plausible, reflecting the subtle intricacies of emotion, long-term love and marriage and the realities of life . But there is also wit and warmth here and some really poignant moments that show that, in the end, no matter how experienced we think we are, love still has some surprises in store. MT