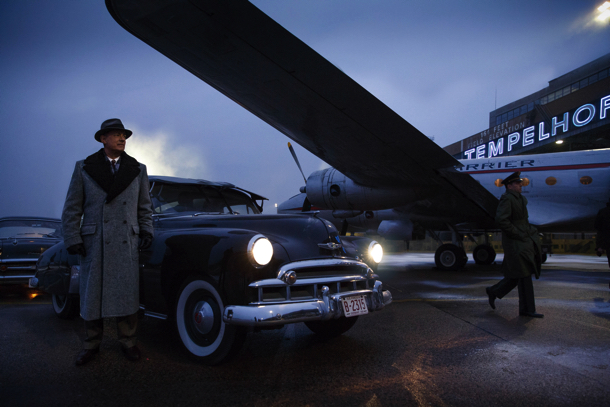 The Cold War dragged on from the late 1940s to 1989, creating a new genre: the Spy film. Many of these films were purely propaganda vehicles, or portayed a romantic or nostalgic world devoid of reality. Bridge of Spies focuses on an attempted exchange of two famous captured spies at the height of the Cold War, just after the erection of the Berlin Wall in 1961 and before the Cuba crisis. With Bridge of Spies Steven Spielberg captures a realistic snapshot of an era where angst dominated day-to-day living on both sides. And who better to transmit this feeling of dread and make it compelling and entertaining but Mark Rylance and Tom Hanks in the leads, supported by a sinister Sebastian Koch, an incendiary John Rue and a smirking Alan Alda.

In February 1962, Rudolf Abel (Rylance), a Soviet Spy sentenced to 30 years imprisonment in New York, and the US pilot Francis Gary Powers (Austin Stowell), who had been shot down over the USSR. The film gets its name from the Glienicker Bridge in Berlin where exchanges took place during the era. This bridge connected West Berlin to the GDR, the borderline between two systems being the mid-point of the bridge.

Spielberg’s real hero is insurance lawyer James B.Donovan (Hanks) who is tasked with defending Abel and saving him from the death penalty, but his success is somewhat of a poisoned chalice as it makes the Irishman unpopular with both his boss and the American people. Most lawyers experienced in this kind of work had declined to act as Abel’s defence attorney, so Donavan was more or less pressganged by his boss Thomas Watters (a gritty Alan Alda) into accepting the role. But Donovan and Abel (the latter a dedicated painter, and we see his daubing a few canvases in the cutaways), for all their opposed political views, somehow find common ground: and a mutual respect.

Shunned at work, Donovan’s family home is attacked by enraged citizens: his teenage daughter Carol (Hewson) nearly killed in hail of bullets, shot through the window of the family house. In the commuter train, with his photo in the newspapers, Donovan feels the probing stars of his fellow passengers. But this all changes when the CIA suddenly needs Donovan’s powers of negotiation for the exchange. As Donovan had cleverly predicted, sentencing Abel to death would have meant that an American spy, caught in the USSR, would have suffered the same fate. Now, Francis Gary Power, pilot of a secret spy plane, which was was downed over the USSR, was the pawn in the hand of the Soviet negotiators in Berlin, who wanted their man Abel back as badly as the USA wanted Powers. Donovan went to Berlin to start negotiating, making his mission even harder when he insists on having a young American student, Frederic Pryor (Rogers), who was arrested by the GDR authorities, released into the bargain – whilst the CIA and the KGB simply wanted a straight forward exchange between Abel and Powers.

Mark Rylance is the right choice for the role of the enigmatic and likeable spy, Rudolf Abel (the name of a friend in the USSR who died). Born William August Fisher 1903 in Newcastle upon Tyne, Abel was the son of ethnic Germans, who were revolutionaries in Tsarist Russia, Fisher’s father had agitated with Lenin in St. Petersburg. Later the family emigrated to the UK, before returning to the USSR in 1921. Fisher, who was fluent in six languages, became a radio-operator for the secret service (OGPU) in 1927, but was sacked in 1938 during the Great Purge, his brother being a follower of Trotsky. In 1946 Fisher was working again as a radio-operator, re-joining the security organisation, now called KGB. In 1948 he was sent to the USA to build up spy networks.

Obviously Spielberg has build up Donovan’s hero status: his insistence on having Pryor released too does not seem to have been the gamble the film makes it out. The young student, having written a thesis on economics in a socialist country, was in the hands of the Stasi, the East German security services. But the power over all aspects of life in the GDR really lay in the hands of the USSR. Since the KGB was not interested in Pryor at all, but wanted the Abel/Powers exchange to go ahead, one phone call from them was enough to release Pryor. And Spielberg certainly got it wrong when he has Donovan travelling to East Berlin, using the Friedrichs Strasse Control Point. All members of the four Allies powers crossed to the East Sector via Check Point Charlie. Showing East Berlin as a city of ruins and roaming gangs is in the first place an exaggeration, and simply wrong regarding the youths, who robbed Donovan of his coat: the East German police was extremely repressive: gangs, of which ever kind, were simply not tolerated.

But apart from these small details, Bridge of Spies captures the angst of the Cold War era when American children were shown films about nuclear bombs at school, and were asked to learn superfluous precautions for the time after an explosion. Little Roger, Donovan’s son fills the bathtub in his home with water in case he has no time after the attack to store the drinking water. And the wild shots, fired into his daughter’s room, are proof (both sides) could not tolerate sympathy with the enemy – even if it was, like in Donovan’s case, purely imagined.

DOP James Kaminski (War Horse, Lincoln) conjures up many worlds with his images: there is Donovan’s family home, the typical backdrop, where Donovan can relax after his adventures behind the Iron Curtain. Then there is the work environment, in the office (dimly-lit like an English Gentlemen’s Club). The courtroom for Abel’s trial feels undignified, rather like a Roman arena. The presiding Judge is antagonistic towards Donovan, the public gallery wants his head, after Abel is awaits his sentence in an atmosphere that thirsts for blood.

Mark Rylance’s Abel somehow dominating the scenes with his subtle intensity, even though Hanks is nominal the hero and more present on screen: Rylance is resigned, only interested in his painting, having experienced Stalinist terror in the first place, he knows he may be put against a wall on his return, or be celebrated as a hero. Hanks’ Donovan is like a kindly bear, loving the good fight, whoever the opponent; he would later negotiate very successfully with Fidel Castro to release hostages after the invasion of The Bay of Pigs.

Spielberg’s Bridge of Spies is a triumph; an epic about two men caught in a time of mistrust, violence and overriding paranoia on both sides. AS