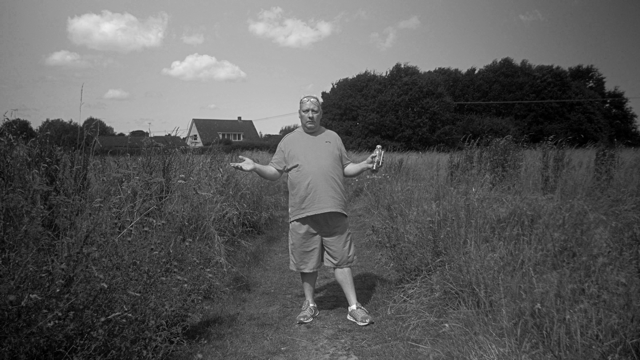 It takes a Canadian Timothy George Kelly (A City is An Island) to tackle the emotional division lines of the Brexit decision from June 2016 head-one. Last weeks General Election only reinforced the chasm between the ‘Leavers’ and ‘Remainers’ – and throwing up new electoral alliances hitherto unheard of: The Conservatives losing Canterbury and Kensington to Labour, but gaining Mansfield and County Durham from their opponents. It is, for the first time perhaps, not any more a question of class, but of education. But most of all, Brexitannia shows a nation split right down the middle – and no compromises in sight.

Divided in two parts the so-called traditionalists and the adventurers Brexitannia shows the former in nostalgic black-and-white, interviewed on their home ground: pubs, sports fields and bingo halls, remaining anonymous for reasons of privacy. Immediately emotions take over. “I think Remain voters are cleverer than Leave voters” contrasts with “I voted Brexit, because most Muslims value Death not Life”. Implacable. Illusions regarding past and present run through the Brexit arguments. A middle-aged man, hoping for a quick pay rise argues that “When I go for a job in two years, they will say at the job agency that they can only pay the minimum wage. I say no, and they give the job to a Pole – but hey, there are no Poles here any more. So they pay me what I want”. Another man, sitting with his friend in a pub, sees greatness for his country, because ”we deserve to be that great nation, that’s why we are called Great Britain, because we are that great nation. And we don’t want to give it up too easily”. Contrast this with a young man’s statement “Britain was, through its history, an aggressor”. The general feeling on the Brexit side is ”No empire, no jobs, we are no longer a strong nation”. But even though she supported Brexit, one young woman is to be lauded for openly defending her membership of UkiP: “I don’t believe in the mass media, like the ‘Sun’ any more”. Another woman from Newcastle confronted the friends of her father who complained about immigrants taking their jobs. She asks a candid question: “How many immigrants do you know” –to which the answer was embarrassed silence. But there were more serious experiences, like a home-grown Muslim woman, who was accosted on the streets by strangers the day after the referendum to be told “We have voted ‘out’, and you are still here”. She is saddened and her daughter traumatised, and had nightmares for weeks. Finally there is a resigned man from Northern England, whose comment is perhaps the most quietly devastating: “Brexit doesn’t really matter here, because we’ve got nothing anyway”.

The experts, like Noam Chomsky explain their well known thesis’ about neo-liberalism and corporations, but somehow, even though their comments are well informed, they seem so much less engaging than ordinary citizens – whatever their opinion on Brexit. Just one example by Saskia Sassen is worth mentioning: “Companies, like Nestle and others, who sell bottled water and soft drinks in developed countries all over the world, steal the water from the soils of the under-developed world, were inhabitants grew their fresh vegetables. And more and more have less land to grow their products, so that we can have bottled water. And these citizens, who are expelled from their countries, because they can’t feed themselves any more, come to our shores”.

Brexitannia takes no sides in this very sad document of our once great nation: it is the emotional chasm that is still growing and which leaves very little hope of reconciliation. It is far beyond rational arguments; to paraphrase Fassbinder “Fear is eating the soul”. AS