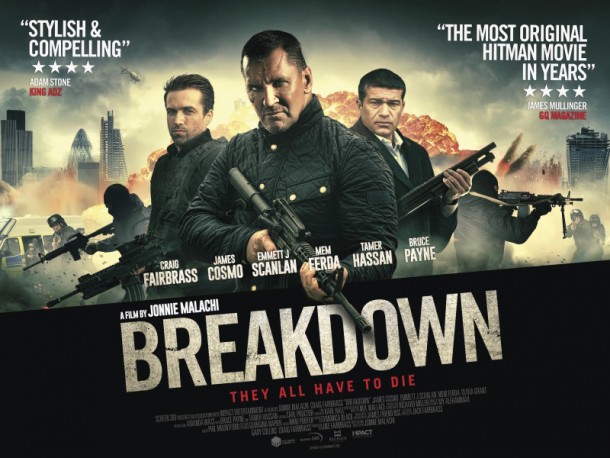 What happens if a contract killer has a mental breakdown and wants to leave the profession? First time director and writer Jonnie Malachi answers with a brutal, cliché ridden and poorly acted piece of film full of bad taste and gratuitous violence. The only redeeming feature is an occasional involuntary joke it throws up.

Alfie (Fairbrass) is a contract killer with a decent family and a home straight out of House & Garden. His wife Catherine (Grant) and teenage daughter Maya (Wass), are there to be protected by him – mainly from his employers, a nasty gang called ‘Homefront’. The boss, Albert (Cosmo) is furious when Alfie suddenly blacks out, due to remorse, while torturing a victim in front of a chuckling client. Albert finishes the job and Alfie has to kill a whole gang to keep the rather disappointed client happy, Alfie’s best friend and college, Connor (Scanlon) lusts after Catherine and is only too ready to slip into Alfie’s shoes. Luckily for Alfie, the mighty ‘Homefront’ consists only of six, rather incompetent members, and with the active participation of his family in his revenge killing-spree, Alfie could be all set up for a happy-end. DOP James Friend makes it easy for the audience: soft lensed action means family life; hard colours represent action – of which there is a lot – just enough to kill any idea that this apology for a film could be taken seriously in any way. AS

AT SELECTED CINEMAS ON 15 JANUARY. DVD DIGITAL FROM 18 JANUARY 2016