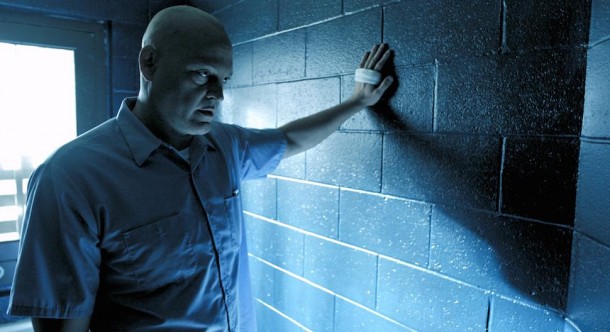 Vince Vaughn plays a lean, mean, decent human being in S. Craig Zahler’s terrific BRAWL IN CELL BLOCK 99. infact its almost impossible to believe the integrity of the lead character Bradley Thomas who is forced to do what a man’s gotta do when his pregnant wife is kidnapped and threatened with death and the mutilation of her baby, in this tightly scripted vicious crime thriller that puts all Thomas’ problems down to the Mexican drug trade he’s involved in. With lines like: “Don’t call me a foreigner, the last time I looked the flag wasn’t coloured red, white and burrito”, this is a free-spirited affair that grabs you by the lapels with its straight-talking narrative and some of the best bare-fisted fighting scenes ever committed to celluloid. In fact the only criticism of BRAWL is the slighted bloated running time of over two hours, hardly a crime thanks to the fruity cast who keep us entertained throughout, with some awkward laughs at the unmitigated violence of it all. Vaughn is terrific as the guy who tries to salvage his ailing marriage by financing his future running drugs for a local gangster, but ends up in jail for defending his accomplices in a pick-up that goes wrong.

Best known for his Western Horror Bone Tomahawk, S. Craig Zahler packs genre tropes into a endlessly moving action thriller that continuously erupts with shocking violence. Vaughn’s Thomas is a solid mensch of a man whose stoicism and emotional intelligence is trounced only by his courage and physical prowess. After being made redundant he pulverises his wife’s car into the driveway, rather than take his anger out of her, despite her confessing to an affair, which the two resolve in calm dialogue each admitting their faults. After being convicted and set to the ‘FRJ’ prison, Thomas resolves to tough it out with his wife’s support, but a sinister threat from the beautifully-besuited Udo Kier,  sends Thomas into slowly unravelling meltdown. At this juncture, the film turns from a sober crime drama to something outlandishly deranged.  There are memorable vignettes from suave prison warder Don Johnson, snippy guard, Fred Melamed and a seething Mustafa Shakir. The dialogue is witty and sardonic as the body count rises and the nightmare reaches its astonishing denouement, with our hero setting a new benchmark for the all time action hero and 21st century man. MT

ON GENERAL RELEASE NATIONWIDE FROM 20 OCTOBER 2017