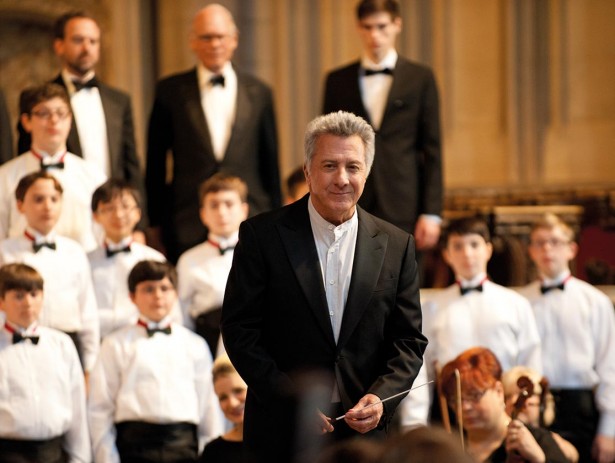 Canadian director Francois Girard (Red Violin) has done well to ingratiate himself with Hollywood: his simperingly-mawkish BOY CHOIR aims to be a tear-jerker but makes any cliche-counter bust after twenty minutes.

Rebellious Texan teenager Stet (Wareign) loses his poor (single) mother in a car crash, filmed with the greatest amount of tackiness possible. Enter Dad (Lucas), who has never met his son, since he has been busy having his own designer family, including two teenage daughters, in New York. Anyhow, his bank account allows him to bribe the principal of the prestigious American Boychoir School, to take young Stet on. His gutless rival for the solo parts, Devon (West), steels Stet’s music sheets before a performance, plasters photocopies of the hero’s late mother’s police photo all over the dining room – but, yes you guessed, to no avail, since Stet, with help of the great humanitarian Master Cavelle (Hoffman) gets the solo part in Haendel’s “Messiah” and, for a proper happy ending – right again – a membership in Dad’s upper class family.

The only interesting part of this schmaltz-opera is the bickering staff of the school, including a really funny Kathy Bates as headmistress. The rest is as far off the mark as the director’s knowledge of music; proclaiming at one moment that Handel’s “Messiah” lasts 50 minutes (real time 140 minutes), then just showing the “Halleluja”, which ends the concert in the film, whilst again, twenty more minutes of music follows in real life – something BOY CHOIR does not give a toss about. AS