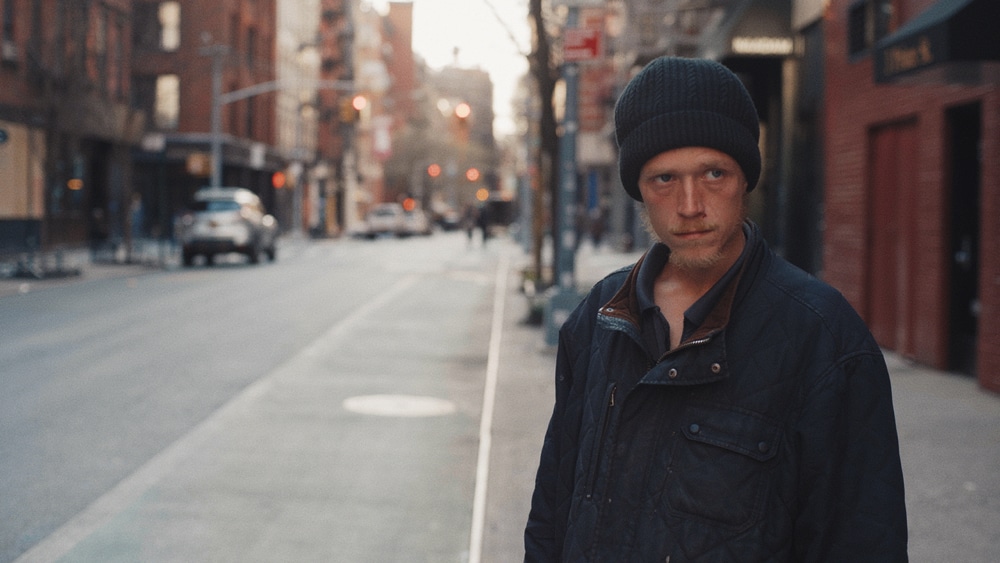 Bowery takes the spotlight for a year in the life of one of New York’s poorest neighbourhoods, located in the south of Manhattan, where life revolves round the subway station of the same name.

Capturing the Covid-19 epidemic and the BLM demonstrations first time filmmakers Irad Straus Mike Mintz (who also serves at DoP) and certainly see the place at its lowest ebb, Richard ‘Dolla’ Thomas is about sixty, sitting in his wheelchair, and ‘directing’ the traffic at the Delancey intersection. Hustling for a few dollars a day, he collects his ‘income’ in paper cup, all he can offer drivers is a traffic update to help them on their way. And his little ‘job’ serves as a kind of bereavement therapy since he lost his wife two years ago.

Another local character Rubia, forty-one, sometimes pretends to be his daughter; her drug habit has certainly addled her brain and she sprays the number ‘6’ three times on one of the pillars in the subway station, she is looking for work but will soon leave for New Jersey to be with her son. Fifty, in his late twenties, had previously held down a job as a courier where the money is decent. But he soon gets lost in New York, using his mobile as a Satnav, and is late for most of his deliveries, his employers disciplining him with a hefty wage cut of 90%.

Then comes the pandemic and empties the streets. Steve Miller and Andrew Harris, both in their mid-twenties, are drug dependent. They are looking for a hostel, but want to avoid the over-crowded ones. Rubia meanwhile, has spent her birthday in the launderette; and takes a break in the basket with her washing, well hidden in the shrubberies. On May 25th 2020, Geroge Floyd is killed by police officers. The first BLM marches erupt spontaneously. Police and demonstrators clash and Richard exclaims “I can’t believe I am seeing this.” We follow Charlie into a church where he begs God to help him back on his feet. He just can’t do it anymore. The last word goes to Richard: “I know, I am a survivor”.

The freewheeling lack of structure is for once just right, reflecting the lives of the protagonists struggling to stay alive and spontaneously doing what they believe can alleviate their situation. Drugs are the main problem, but hygiene and food are a close second. Bowery is certainly a tribute to human survival, faced with poverty and now the pandemic, the number of ambulances carrying the dying multiplying, this is just a question of keeping on, keeping on. Bowery is not an easy watch in its depiction of hard core realism,  but it certainly documents an important place in time.