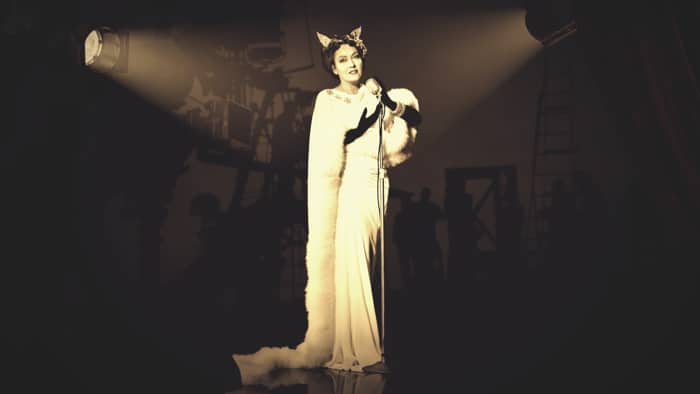 Veteran documentarian Jeffrey Schwarz unearths a musical version of Sunset Boulevard (1950) and a 1950s love triangle that pictures three victims of the Hollywood system where ageism and homophobia played a dominant role.

The three were Gloria Swanson, star of Billy Wilder’s original 1950 feature,  Dick Hughes, and his lover Richard Stapley (aka Richard Wyler).  Hugh was the composer of the musical “Swanson on Sunset”, with Stapley responsible for the lyrics. It ran for six weeks at the “Cinegrill” in Los Angeles, from November 1994, with revivals until 1997.

The original version dates from 1955 when two young artists and lovers, Dick Hughes and Richard Stapley met Gloria Swanson (still smarting from being pipped to the post by Judy Holliday for the Best Actress Oscar in 1951). During the early fifties , the trio worked on “Swanson and Sunset”, but a lack of finance, as well as Paramount’s refusal to grant Swanson the rights to the Wilder classic, eventually nuxed the project.

Swanson then fell for Stapley and his relationship with Hughes came to an abrupt end. Stapley re-invented himself, becoming a popular actor: The Girl from Rio, and the TV series The Troubleshooters and a bit part in Frenzy being highlights of his career. The film’s focus then swings to its gay theme with Richard’s second wife Elizabeth being well aware of his sexuality, just another ploy to hide his gayness for the Hollywood system. She was prepared to share the limelight and the two remained “just good friends”.

But Dick Hughes could not let go of the musical that never was, and remained obsessed with the feature until his death. He continued to play the piano in exclusive clubs and later became a conductor. Gloria Swanson also remained fixed on the project. According to her granddaughter Brooke Anderson, she never forgot the music written by Hughes, “it never died for her”. Yet, curiously, Swanson never mentioned the Sunset project or even Hughes or Stapley in her autobiography “Swanson on Swanson”. In 1990 Hughes revived “Swanson and Sunset”, playing the role of his younger self despite being well into his sixties. And when he heard about the success of Lloyd Webber’s 1994 musical “Sunset Boulevard”, he reconciled with Richard, who had morphed back from Wyler into his Stapley identity.

Despite their up and downs the two completed the musical for its 1994 premiere at the “Cinegrill”. With the help of Steven Wilson, from the University of Texas in Austin, Schwarz cobbles together enormous amounts of material but the story of the (probably unconsummated) love triangle is never quite divorced from film history, Schwarz clearly felt empathy for his subject and avoids voyeurism at all costs sticking to a mostly conventional approach with multiple talking heads enlivened by animated cartoons of the trio in action. AS