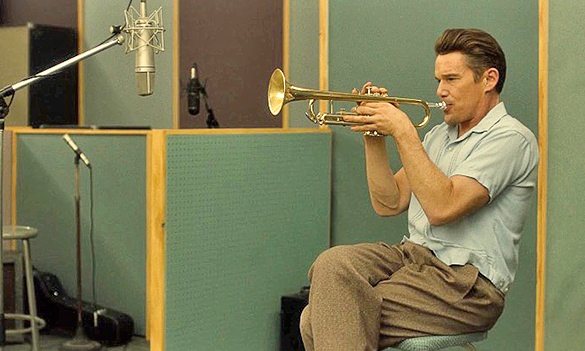 Ethan Hawke’s career took off when he received critical prise for Reality Bites which lead to his role in the Before trilogy in a career that has steadily grown as a screenwriter, novelist director and actor in mainstream titles and  independent arthouse fare such as BORN TO BE BLUE where he plays the role of Chet Baker in a re-imagining of a period in the celebrated jazz musician’s life that blends reality with ‘semi-fictiona’l elements as a film within a film.

Opening with Baker playing himself in a biopic, we see him falling for his on-screen love interest (Carmen Ejogo) as he battles with heroin addiction.

With its relaxed jazzy score, BORN TO BE BLUE plays out in a freewheeling way as it dabbles at the edges of truth which gives it an innovative but also questionable slant, neatly side-stepping cliche. Like many artists, Baker did struggle with drugs, and interestingly, he found it difficult to break into the world of jazz as a white man – but this is by no means a pitiful portrait or one that see Baker cry into his cups but it is certainly a worthwhile take on the music industry of the era.

Hawke is convincing as the tortured musician (did he have trumpet lessons – possibly) and appealing in the role to which he brings a certain intensity without going overboard. Born to be Blue is an enjoyable film rather than a great one. But worth watching nevertheless. MT