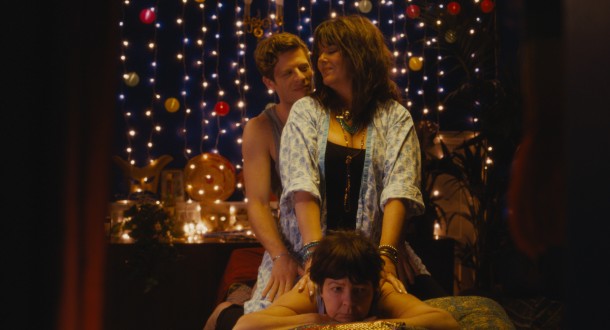 BONOBO’s great premise: that human conflict can be minimised through regular sexual activity is at best hopeful and, at worst, naive but let’s give it a spin round the block. Matthew Hammett Knott’s third feature, about a human community organised to mimic the lifestyle of the Bonobo apes – is set in Devon. To his credit he has a devised the piece based on predominantly female leads; to his detriment these characters are either sexually uptight or barking mad. What could have been the sinister story about a deliciously subversive cult or even a hilarious comedy with unusual characters instead turns out to be a trite drama that veers between the cringeworthy and the desperately weird.

That said, Hammett Knott’s has managed it all on a shoestring and with a very accomplished cast who really do their best in the circumstances despite having to play a string of boring stereotypes. The first is played by Tessa Peake-Jones as Judith, a well-meaning, intelligent woman in her late fifties who has single-handedly brought up her only daughter with the treasured hope of her becoming a successful lawyer with a ‘decent husband and a family’. Nothing wrong with that, so why make her feel like a boring failure to the rest of this talentless bunch of real losers ? Just because she’s not twenty something does it mean she can’t be portrayed as alluring, successful or elegant? (what about Mrs Robinson?). Her counterpart, the voluptuously endearing Anita (Josie Lawrence), who runs this community of “Bonobo humans” is depicted as some sort of sad nutter despite her attempts to run a business giving sanctuary to a community of young people who have somehow ‘lost their way’ their only redeeming feature being firm buttocks (the boys) and porky thighs (the girls).

So Judith must join the community in order to resolve the conflict between her and her daughter. Sadly this story goes nowhere fast. It’s not enough to show a motley crew of puerile characters indulging in free sex while ‘a parent’ (who has never had sex) looks on in horror – they have to have personalities and there has to be a narrative arc. The young ones in the assembled cast are composed of Ralph (James Norton) a bumptious yoga-practicing man-child: Malcolm (Orlando Seale) who’s only claim to fame is having impregnated his colourless girlfriend (Carolyn Pickles) and a couple of vapid gay men who just stroke each other and everybody else. This is a ‘drama’ with no dramatic punch, a ‘comedy’ with scant laughs;  just a bunch of one-dimensional kids and clichéd adults (Judith’s character feels more in her eighties that her fifties). Even Judith’s lawyer graduate daughter Lily (Eleanor Wyld) is portrayed as a facile kid who only comes into her own when one of the men tries to bed her.

So if you’re looking for a light-hearted piece of comedy fluff to have on in the background on a stag night on a girls’ night in – BONOBO will do the trick. But if you’re expecting something more appealing or even funny give it a miss. MT

ON GENERAL RELEASE FROM 5TH DECEMBER 2014