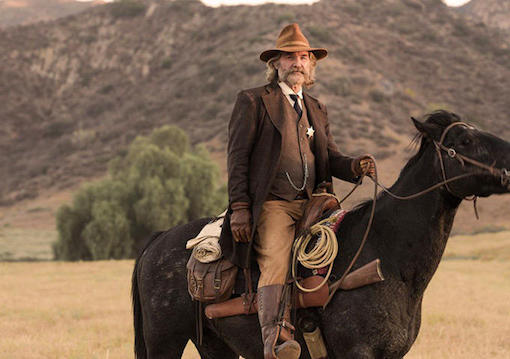 When a bounty killer comes to the settlement of ‘Bright Hope’, he is followed by some weird creature – half Indian, half Zombie – wanting revenge for the killer’s desecration of the Indian burial site. The creature kidnaps not only the killer, but also one of he Deputy Sheriffs and Samantha (Simmons), wife of Arthur (Wilson), a rather peace-loving man, suffering from a leg wound. Sheriff Hunt (Russell) sets up to rescue the two, together with the bitter racist Brooder (Fox), his old deputy and ex-medic Chicory (Jenkins) and Arthur, who joins the group against the advice of the Sheriff and his Deputy. Brooder is killed and Arthur finally falls far behind, but reaches the mountain hideout of what turns out to be cannibals, in time for the showdown.

Some scenes are only just watchable, sometimes the gore is unflinching vile. The appearance of flesh eating Zombies in the middle of a desert makes no sense, particularly when Zahler tries so hard to emulate Ford’s The Searchers, only succeeding in making Brooder a soul mate of John Wayne’s Ethan Edwards. Chicory is supposed to be another Walter Brennan as Eddie in Hawk’s To Have and Have not – but Zahler is just a grave digger of past classics himself: showing a person ripped in half has nothing to do with serious cinema, never mind exceptional great ones.

DOP Benji Bakshi tries equally very hard to create images worthy of bygone eras, but he just copies and does not invent. Russell is a reliable lead: the trusty, slightly cynical and very tired. Matthew Fox, even though sometimes over the top, does create the menace and salaciousness of the eternal revenge killer. Wilson and Simmons are shown as a loving couple, but their characters are by far not fleshed out enough. Overall, Bone Tomahawk gives away any pretence to be serious film, by mixing a classic story with elements of a third rate Slasher movie. AS