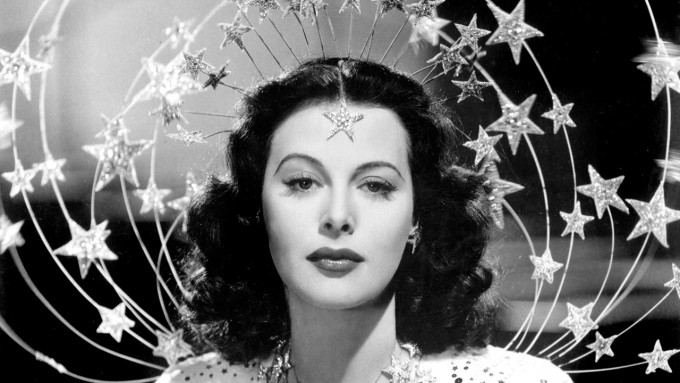 Hedy Lamarr wasn’t just a pretty face. First time director/writer Alexandra Dean uncovers some juicy secrets about Hollywood star Hedy Lamarr (1914-2000), the bombshell who, together with composer George Antheil, invented a Radio Guidance System based on Frequency Hopping, which is today the basis for WIFI, Blue Tooth and GPS.

Hedwig Eva Maria Kiesler was born into an Upper-class Jewish family in Vienna. Early on in life she was encouraged by her father to undertake scientific experiments. As a teenager she went to Berlin and was trained as an actress by Max Reinhardt. Returning to Vienna, she worked as a script girl and had small parts in four features, before starring in Gustav Machaty’s 1933 outing Ekstase (Ecstasy), appearing in the nude – which begs the question: how did a director talk an eighteen year-old girl into disrobing? Well Kiesler was naturally blamed and took the brunt of the scandal. To get away from it all Hedy married the Austrian ammunition manufacturer Fritz Mandl, who in spite of being at least partly Jewish, delivered weapons to Mussolini. Mandl was a tyrant obsessed with his wife, and Hedwig had to put on a maid uniform to escape from him in the middle of the night. In Paris she met Louis B. Mayer in 1937, who signed her up for MGM, giving her the screen name Hedy Lamarr. She made her Hollywood debut in the following year starring in Algiers, opposite Charles Boyer. In the decades that followed she would star in 25 features, mostly casted as an exotic seductress.

When WWII broke out German U-boots dominated the oceans, nearly winning the war for Hitler. Lamarr and composer George Antheil developed a Radio Guidance system which would have helped to protect Allied ships from the German U-boots, but the Navy decided a woman could hardly be of any use in the manly pursuit of war victory. Lamarr was Instead told to sell War Bonds which she did to the tune of over 25 Million Dollars. Much later, the Navy apologised, giving her an award which her son Anthony accepted on her behalf. Lamarr, who by then only communicated via phone with friends and family, phoned her son during the ceremony, and thanked the audience for her belated award. In 2014 Hedy Lamarr was officially introduced into the National Inventor’s Hall of Fame.

On the big screen she played in popular features like Ziegfeld Girl and Boom Town Girl, and in 1942 in White Cargo, cast an a half-Arab seductress, who told the white farmer she wanted to seduce him crawling seductively on her belly: “I am Tondelayo. I make tiffin for you?” The discrepancy between reality and screen life for a woman like Lamarr, who had just invented one of the most revolutionary electronic technologies, must have been maddening. In 1950 she starred in Samson and Delilah, which was the best-grossing film of the year. She shared a passion for aviation with her boyfriend Howard Hughes (“the worst lover I ever had”), but her marriages, six between 1933 and 1965, always ended unhappily in divorce. She had two children with John Loder, Anthony and Denise, who feature extensively in this documentary. Lamarr’s later years were a nightmare. She fell under the influence of “Dr. Feelgood”, Max Jacobsen, who prescribed amphetamines for his many clients from Hollywood, including President John F. Kennedy. Lamarr also designed a mini Ski-resort in Aspen, having finished her screen career in 1958 with the appropriately titled The Female Animal.

BOMBSHELL is a revelation: if you wanted to invent a script about how women were/are treated in the film industry, you’d be hard pushed to come up with a more poignant story. Director Alexandra Dean has excelled with this documentary about an intelligent and courageous woman: Hedy Lamarr’s only fault was to be born hundred years too early. AS

ON RELEASE AT CURZON CINEMAS FOR CHRISTMAS