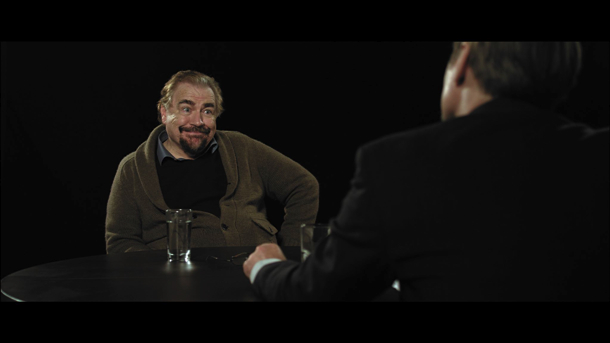 Ethan Blumenthal, played by the director himself, is a drug rep who suffers from a mental form of constipation: all his thoughts race around in his head, but he is unable to translate them into the right words. For example, when his girl friend Christina touches him gently after making love, he gets angry with her: “You woke me up”. Next morning he apologises, but soon he feels inferior again, and breaks their relationship off. Unable to cope with this, he tries to seduce an old girlfriend and gets a hand job from another girl – being on the run from himself, but involving and hurting other women randomly.

Ethan suffers from the wide discrepancy between his inferiority complex and a male need to feel superior to his partner. In this he is the mirror image of his father Saul, an academic, who is unable to come to terms with the death of his playwright brother Harold, and whom he accuses of ripping off his own writings for his successful plays. Saul does not see the crisis his wife Cheryl, an actress, is going through – like his son, his internal dialogue is overshadowing his life, making him unable to connect with his family. His problems manifest themselves in a pure physical constipation, making him spend most of his time in the bathroom.

Whilst clearly set in a Jewish environment, from which the protagonists suffer in different ways, the problems they encounter are very much universal, one does not have to be a Jewish man to be insensible – whilst feeling exactly the opposite, listening to one owns “great ideas”. One scene is particularly revealing: when Ethan finds out a few days after their split, that Christina is pregnant, he asks her: “What are your politics on this subject ?.”

Productions values are high and Seth Fisher’s debut film has all the merits of a first film (particularly a probing curiosity) and at the same time shows restraint , never letting the subtle humour of the characters degenerate into something raucous – Fisher keeps a distance, loving his protagonists, but not adoring them. The irony is never sharp, but the director allows no sentimentality: he observes with maturity, so rare in a first timer. The acting is brilliant, the ensemble trying to work for each other and the camera gives us enough intimacy, without being to obtrusive.

BLUMENTHAL is made with love, but executed with wit and a caring, but not forgiving insight into the male psyche. AS