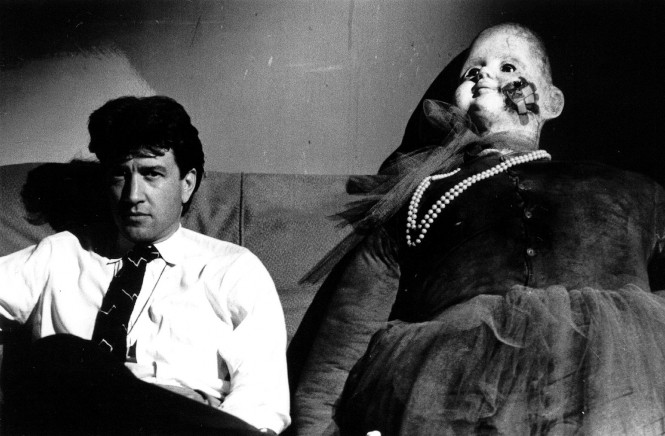 Aficionados of the iconic thriller made in 1985 by David Lynch will be entranced by Peter Braatz’s documentary BLUE VELVET REVISITED which world premieres here in London on 7 October 2016. The director served as an editor on the original film made in Wilmington, North Carolina and this ‘meditation on a movie’ offers a collection of his personal musings – a daily chronicle – of the making of the original that has achieved cult status in the intervening years.

In a grainy indie style Braatz pieces together his footage to form a collage of the shoot with cast members chatting and hanging around on set: Isabella Rossellini, Laura Dern, Dennis Hopper and Kyle MacLachlan, all recorded on his Super 8 camera. There are some insightful interviews with Lynch himself, who comes across as confident and articulate, and talks of mastering new technology so that he can “think” his films onto the screen without the endless preparation entailed in each frame and scene. Isabella Rossellini and DoP Frederick Elmes offer their feelings about the film and the personalities involved. These are spliced with evocative inter-titles picking out buzz words and phrses so familiar in the film “a candy-coloured clown” (originally from Roy Orbison’s song) and “tiddlywinks” are a few. The film speaks for itself and has a pleasurable rhythm of its own although there is no clear narrative, as such. Braatz cleverly evokes the detached, unsettling terror and dreaminess of the original and has obtained Lynch’s exclusive permission to document his drama with this material that has never previously been seen by the public. BLUE VELVET REVISITED feels as much a reverie of filmmaking in the eighties as a trippy voyeuristic voyage back in time. MT