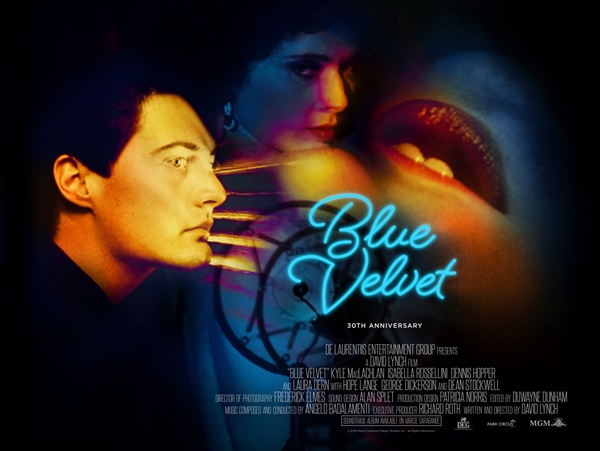 In the recent eponymous documentary The Artlife, David Lynch talks about unsettling events that took place during his childhood in a small-town American setting, similar to Lumberton where BLUE VELVET takes place (although this feels like a larger city given its river and industrial wasteland). One of these incidents involved a naked woman outside his neighbour Dickie’s house. Sitting on a curb, she was crying and bleeding from the mouth – is this Dorothy? Those pivotal moments seem to have sparked a dark introspective quality in Lynch that he can’t talk about, but that later found its way into his films: Eraserhead, BLUE VELVET and Mulholland Drive.

BLUE VELVET is a noirish fantasy thriller flecked with irony, and a convincing rites of passage love story. Lynch could easily be Jeffrey Beaumont, the pleasant college boy who returns to the fictitious town of Lumberton to run the family hardware shop, while his father recovers in hospital from an incident involving the garden hose. The discovery of a severed human ear then takes Jeffrey to the local police chief, Detective John Williams, whose daughter Sandy will become Jeffrey’s accomplice in an adventure that leads to sexual awakening – although not with Sandy, at least not in the beginning.

Clearly, both Lynch and Jeffrey Beaumont come from similar loving families, but they also strive for adventure and, particularly, the darker side of life. Not content with running the local hardware store, student Jeffrey turns detective, hatching a plan that dices with danger, based on Sandy’s inside information on the police inquiry. And this involves gaining access to the home of nigh-club singer Dorothy Vallens (Rossellini) who is linked to the case and lives nearby. What Jeffrey discovers next involves a sordid criminal underworld that excites and appals him. Gradually he is drawn into a nefarious web of sexual deviancy, deceit and murder that runs contrary to his simple life in the lumber town where the most dangerous threat is being hit by a falling tree. A place where “a woodchuck actually knows how much wood he can chop” according to the local radio station.

BLUE VELVET is full of contrasts: red roses and white picket fences jossle with a severed human ear and a kidnapped child. Tonally, Lynch lurches successfully from sinister noir to light romance, and dissonant irony, and the dissonance is what makes it all so compelling. Jeffrey and Sandy are squeaky clean (how does the raunchy red décapotable fit in?) – sanitised even, in contrast to Dennis Hopper’s snarlingly vicious sadist and Isabella Rossellini’s battered bunny boiler. The motley crew that hang around in Rossellini’s private life – when she is not crooning on the dance floor of The Slow Club – are truly are a weird mix of depraved old biddies and over the hill hill billies, one of whom is also a convincing crooner in the style of Elvis (Dean Stockwell) . These are surely snatches from a Lynchian teenage dream, and over the years he has successfully channelled this dream life into the world of film.

Back in the day BLUE VELVET was quite shocking – the scissor scene is seared to the memory; 30 years later the bizarre and ironic elements come to fore – the opening scene with the garden spray and dog and the final one with the model bird – and it feels almost quaint and Eighties. The score is magnetic and memorable but without the florid colour BLUE VELVET could actually be a Forties film Noir, complete with its functioning factories, Deco diners and even a smaltzy night club. The power of great cinema is its ability to re-invent itself across the generations. MT