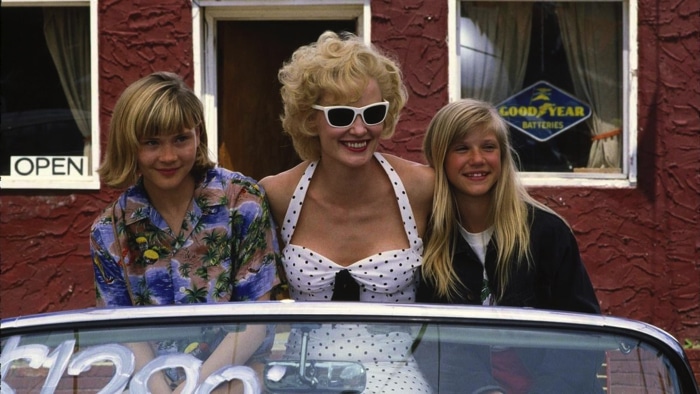 A few years before he died in 1991 Tony Richardson created a powerful portrait of obsession between a diva and the man who loves her. A more mainstream hit than his arthouse affair, thirty years earlier, but with the same mesmerising punch as Mademoiselle (1966).

Jessica Lange and Tommy Lee Jones score high on the sparky chemistry front as Carly and Hank whose dynamite devotion dominates everything else in their lives, including their children and an army career that suffer as a consequence. And so did  Richardson’s swan song, hitting the buffers when Orion went bust, its release was put back until three years later. Blue Sky is still a memorable tribute to his career.

If histrionic performances appeal – and Jessica Lange scooped Best Actress for this one – then Blue Sky is right up your street. The Oscars are littered with plate-throwing turns from Bette Davis in Jezebel to Elizabeth Taylor in Who’s Afraid of Virgina Woolf?, yet emotional nuance is a more difficult skill to master, and therefore possibly more laudable. Food for thought. Lange is particularly fiery here and oozes chutzpah and charm, and her dance sequences are really spectacular.

Hank is besotted with his wife, despite her manic moods, largely attributable to her unsuitability as an army wife confined to prefab housing in military backwaters, as here in Selma, Alabama. Carly is a deeply narcissistic fantasist who sees herself as a Southern Belle of the ball, lauding it over everyone in her sphere: in short, not one of the army girls, or a team-player. Her marriage with Hank is a miracle but it works (to the detriment of everyone else), such is the mystery of love and sexual attraction, and the script – a three-handed effort by Stagner with Arlene Sarner and Jerry Leichtling – conveys this with considerable skill and insight, leaving the strand about army radiation tests in the ‘atomic’ 1960s firmly in the background.

Talking of which, Hank is an army scientist engaged in nuclear testing in the Alabama desert and tasked with investigating a dangerous leak. But Carly proves to be far more dangerous: a ‘stay at home’ housewife is, in her case, a misnomer if ever there was one: she spends her time cavorting topless on the beach and dancing suggestively with Hank’s boss, a smouldering Powers Boothe, and neglecting her daughters who are gleefully left to their own romantic devices.

Highly entertaining and occasionally funny, this is a complex, fraught and often embarrassing inter-dependent relationship, Lange and Lee Jones shimmer at the top of their game in Richardson’s last hurrah. MT