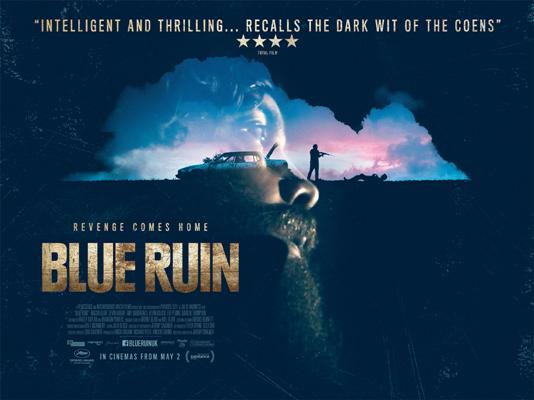 Blue Ruin is a slow-burning feral beast of a thriller that holds you in tight claws ’til the final bloody finale.  Awarded at Cannes, it’s the second feature of Jeremy Saulnier who cut his teeth as a cinematographer on low budget horror outings before he wrote and directed this stylish indie revenge piece, which despite a low budget makes clever use of the atmospheric Virginia countryside, stunning visuals and a hunting original soundtrack with shades of the Coen Brothers in the storytelling.

Macon Blair plays Dwight, a mysterious and homeless loner gets by scavenging until he learns of the release from prison of Wade Cleland, who murdered his father in revenge for a long-standing feud with his family.  This forces him to return to his former home and his estranged sister’s to reconcile with her and protect her from further acts of retaliation from the Clelands.  Clearly disturbed and very much an outsider, Dwight is no murderer, but the depth of feeling he had for his dad, mingled with fear and anger forces him to fight back with a vehemence he never knew he had.  Tracking Dwight down he murders him in a surprisingly brutal act of defence which cannot go unpunished. The consequences take him down an unpredictable journey from which there is no logical or possible return.  An old school pal, Ben Gaffney (Devin Ratray ) provides unexpected support as they

Although Blue Ruin opens in a straightforward vein, it reveals its narrative very gingerly so as to keep up on tenterhooks as the true awfulness slowly emerges. This unsettling treatment of leaving out so much information is intensified by minimal use of dialogue and long stretches of silence allowing the imagination to run wild and feeding on the subconscious to powerful effect. Saulnier’s skilful use of pacing is probably the most powerful tool in his arsenal of mean tricks, making him an exciting talent in the making. MT